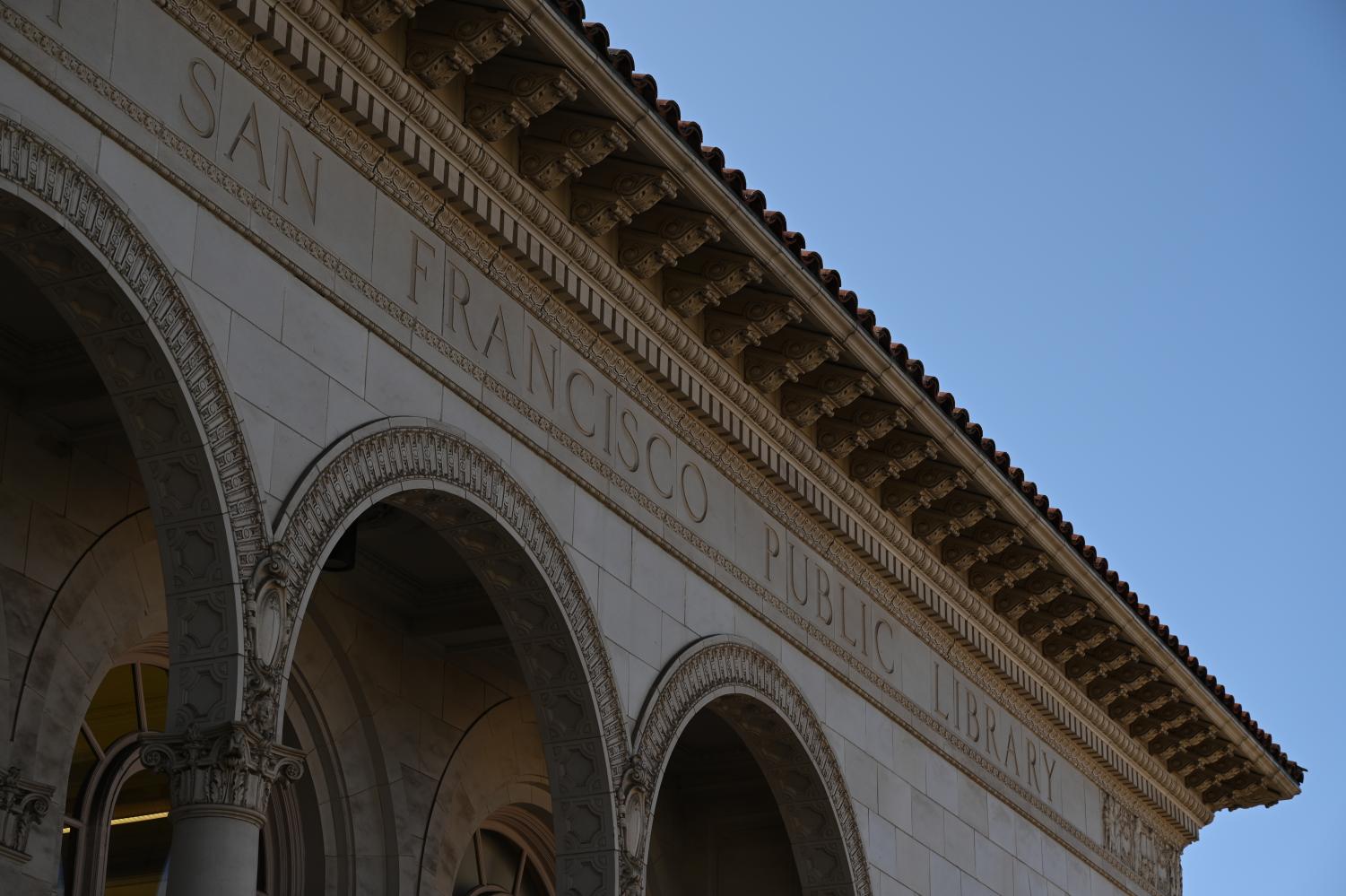 The Sunset Branch of the San Francisco public library.

Committing itself to racial equity, the San Francisco Public Library (SFPL) released a statement in June announcing its solidarity with Black Lives Matter (BLM) and its efforts to reutilize library resources. SFPL is one of 177 urban libraries across North America that have dedicated themselves toward promoting racial and social equity under the Urban Libraries Council. SFPL’s efforts, along with other libraries across the Bay Area, represent a changing attitude of how libraries can best cater the public in equitable ways.

“Public libraries have a unique and vital role to play in advancing equity and addressing racial divides. This means taking a closer look at our services and being honest about how our institution has failed to help advance racial equity,” read the statement from SFPL.

In an effort to provide “contact-free” services to areas of the city in most need, labeled “equity zones,” curbside pickups will begin at SFPL’s Main Library and Excelsior branch in early August.

Equity zones were created in 2019 by the San Francisco Recreations and Parks Department by looking at “the low income population in certain communities, and how they’ve been historically under-resourced,” according to the SFPL Director of Communications Kate Patterson. The program is among many SFPL social justice initiatives with the intention of removing itself from neutrality when it comes to social issues.

“I think what’s really interesting right now is these equity zones almost perfectly overlay with where COVID-19 is sort of most prevalent in our city,” Patterson said. “So if you look at where the highest rates of disease are, it’s very distinctly geo-located in the Tenderloin, into the Mission, into the Excelsior and then into the Bayview in Sunnydale. Those veins sort of represent where there are historically underserved communities.”

Resource lists such as “How to Be an Antiracist” and “Understanding Structural Racism” also direct the public to books available for digital download and upcoming curbside pickups. Alejandro Gallegos, SFPL community engagement manager and co-chair for the library’s Racial Equity Committee, noted an increase in eBooks and interest in content surrounding race and social justice. “Stamped From the Beginning” by Ibram X. Kend, for instance, currently has 283 holds– there are 196 copies of the book across SFPL.

“People are engaging these. They’re actually looking at these, they’re using them,” Gallegos said. “You can check out the book how to be an antiracist, right. But then you have 300 pages to go through. It’s a great book, but we don’t know how many people are going through it. It’s hard to say, but part of our mission is to provide that information.”

The increased interest in these resources is a microcosm for the national-scale piqued enthusiasm for self-education in regards to conversations around race. From May 31 to June 6–– starting six days after the murder of George Floyd–– the joint-area of San Francisco, Oakland and San Jose led the state in Google searches for “social justice books,” followed by San Diego, the Sacramento-Stockton-Modesto area and Los Angeles.

Numbers represent search interest relative to the highest point on the chart for the given region and time. A value of 100 is the peak popularity for the term. A value of 50 means that the term is half as popular. A score of 0 means there was not enough data for this term.

Fellow co-chair Shawna Sherman also hosts programming centered around topics of interest to African-American individuals such as “Let Her Tell It,” a panel of writers speaking about mental health and their creative processes, as well as a poetry reading that will celebrate a book “penpal poetry” between Black, Bay Area poets and poets from several countries in Africa.

The library is hoping to resume its RealTalk speaker series digitally with an emphasis on racial visibility. In September, writer and journalist Roberto Lovato will speak for SFPL to promote his upcoming book, “Unforgetting: A Memoir of Family, Migration, Gangs, and Revolution in the Americas.”

In addition to opening up library services in these equity zones, SFPL has already donated roughly 10,000 books to the Opportunities for All initiative under San Francisco’s Human Rights Commission, provided books to hotel sheltering sites under Project Room Key and the Human Services Agency and printed and mailed 60,000 summer reading tracker guides and booklists for children to participate in summer reading lists. The library also went fine-free last September, after an SFPL-San Francisco Financial Justice Project of the Treasurer’s Office study found that fines disproportionately impact low-income, racial-minority communities.

SFPL is currently working with the San Francisco Office of Racial Equity to create a race equity plan for the libraries across the city.

One of the challenges libraries will continue to face is the digital divide– the disparity of high-speed internet and access to technology between low-income or rural communities and more affluent neighborhoods. With public schools in California confirmed for remote learning and the significant need for the internet throughout the pandemic, SFPL and other Bay Area libraries, such as Oakland Public Library (OPL), are working to navigate through the circumstances of the pandemic.

OPL stands in solidarity with BLM, but its equity work precedes the current social unrest. Addressing the digital divide, OPL donated 500 hotspots for students in Oakland Unified School District. OPL staff is also spread across the city as disaster service workers to assist services such as food distribution, COVID-19 test scheduling and has transitioned services such as free lawyer consultations, its English conversation club for English learners for online use.

“Libraries have historically deemed themselves ‘neutral’ which effectively works to maintain the status quo of white privilege. We must reflect on the ways that Oakland Public Library perpetuates institutional racism. In so many ways our library, an institution with power, is a reflection of our community,” read a statement put out by OPL.

Like much of the South, libraries were also segregated under Jim Crow laws. At the 2013 American Library Association Annual Conference, the late Congressman John Lewis recalled being denied a library card in Alabama’s Pike County Public Library during the ’50s. The first time Lewis returned to that library since that incident was in 1998 to promote his book “Walking with the Wind: A Memoir of the Movement,” where he was gifted with a library card by the library staff.

“We like to romanticize and see ourselves as places of democracy where all ideas are valued. And I’m not saying that there’s no truth in that, but we’re also government agencies, part of municipalities, and we share the history of, in various parts of the country, of segregation,” Mahasin Aleem, children’s collection management librarian and OPL Racial Equity Team member, said. “I feel this still at the highest levels with folks who have graduate degrees who are actually librarians. It’s overwhelmingly white, it’s overwhelmingly white women, and then you go to the highest levels to directorship, there are often white men.”

An Oxford study published in December 2017 also found that those with “Black-sounding names” were less likely to receive a polite –– let alone any –– response via email at libraries than those with “white-sounding names.”

Aleem and the OPL Racial Equity Team work through the Government Alliance on Race and Equity (GARE) to create training programs for librarians and those working at OPL. The program, known as the Advancing Racial Equity Academy, has four modules: Race and Equity; Social Power and Implicit Bias; Inclusive Engagement, Accountability in Local Government; and Implementing Equity. The former two address internalized racisms on the individual level and work through them, while the latter address racism on a systemic level, calling it out and removing it from the libraries.

“I would say that module three is the module that I come back to over and over again in my daily work, in the sense of trying to use a racial equity lens to guide the work, or analysis, to guide the work we’re doing,” Aleem said. “In terms of in the workplace, what we’re focused on is trying to make sure that our institution is not furthering racism in the ways that it can. Our work can be used for liberation and justice and not oppression.”

Similarly, SFPL’s Racial Equity Committee was formed under the late Mayor Ed Lee through GARE. Fully implemented across the city in 2016, GARE’s Engineering for Equity program, strives to achieve its two principle goals: to advise city departments on eliminating public service disparities and to ensure community involvement in the full range of government decisions.

For libraries such as the African American Museum and Library of Oakland (AAMLO), which is part of the OPL, the goal of racial equity is something that has always existed, according to Chief Curator Bamidele Agbasegbe-Demerson.

Unlike most public libraries, AAMLO has a non-circulating collection. The museum and library began as a private collection of African-American artifacts and documents in 1946. It houses original material from the Black Panther party and Huey P. Newton, as well as a plethora of other material, some dating back to the 19th century. While curbside pickups at five OPL branches are now in motion, AAMLO must resort to other methods to keep the public engaged.

Agbasegbe-Demerson said some of the initiatives in the works include digital “Meet the Author” experiences and “Soirée AAMLO” – an hour-long experience held every other month starting with Jazz programming, visual art held at AAMLO, spoken word and ending with Jazz. In the months between Soirée AAMLO, classic Black films dating back to the ’30s and ’40s will become available for streaming. These experiences, along with children’s story hour programming, are anticipated to begin in August.

“This is nothing new for those who were the pioneers and the dedicated pioneers who organized this institution,” he said. “Anybody that starts a museum devoted to African-American history, African-American culture, certainly take those topics seriously and are at the forefront of championing such institutions and engaged in efforts to educate the community about African-American contributions on the local level, as well as on the national level.”

Chris lives in San Francisco and hails from Southern California. In his free time, he enjoys reading, running and living vicariously through the women on The Real Housewives of Beverly Hills. After graduating, he looks forward to catching up on some much-needed sleep.
Anne Caroline Lima
James Wyatt