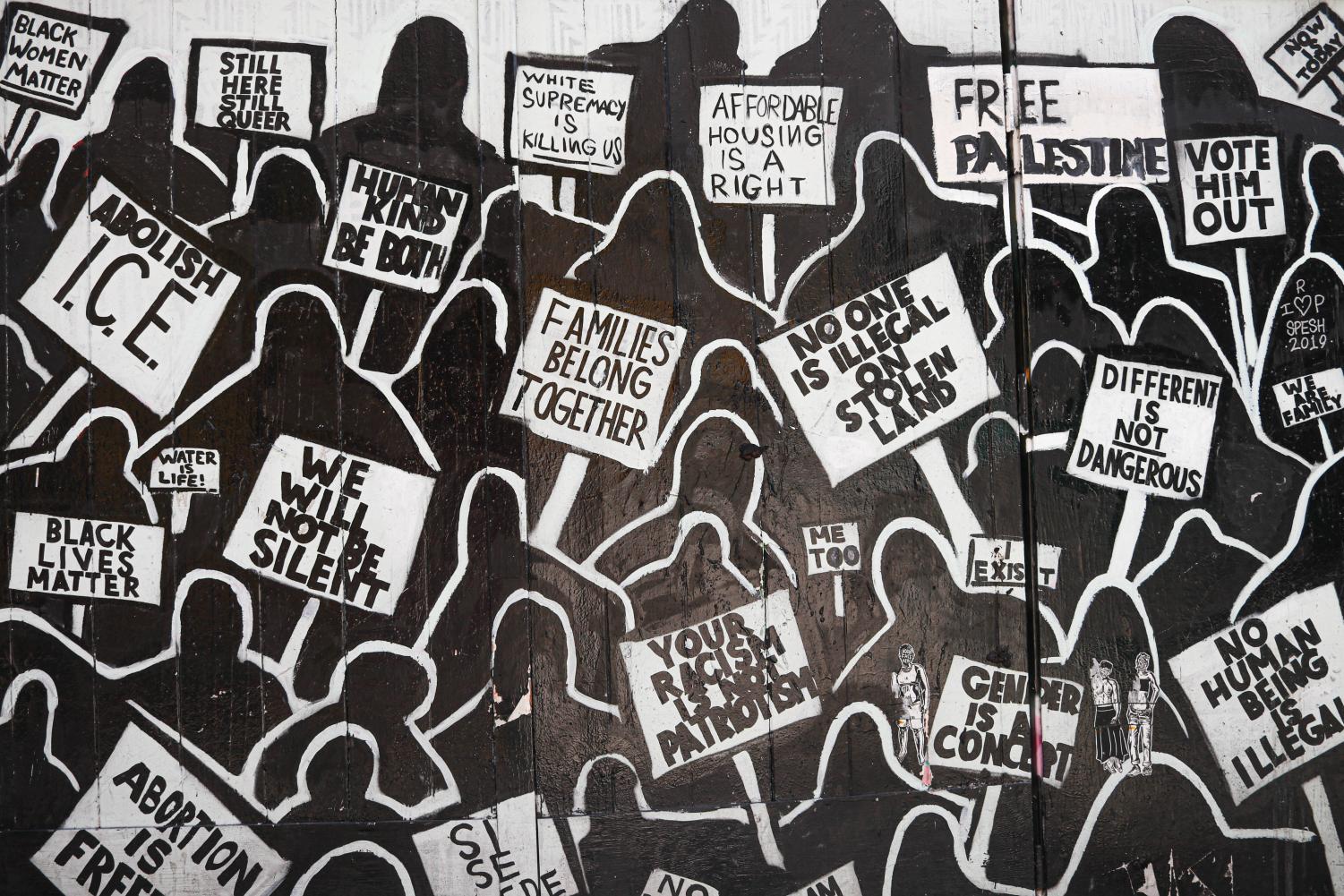 The image of a decomposing pig with a police officer’s cap is plastered on an abandoned shop store sign that rests adjacent to U.S. Highway 101. The letters ‘ACAB’ are written in freshly-sprayed black ink beneath it, and in the periphery stands the half-shadow of St. Mary’s Cathedral. San Francisco street artist John Vochatzer plastered copies of his pig piece around the city and posted it on his social media platforms. The caption, “ACAB,” is an acronym for “all cops are bastards.”

Street artists in San Francisco and Oakland are decorating their cities in a show of their support for protests revolving around the killings of African-Americans, the Israeli settlements, LGBTQ+ solidarity and other progressive social actions.

The Bay Area’s burgeoning street art scene is a result of social upheaval and national calls for institutional reform. These increasingly ubiquitous images are not only influenced by political and social injustices, but they also serve an educational purpose by promoting opinions and views not usually discussed in mainstream media.

“When overnight, entire cities are getting completely covered in anti-cop, anti-government graffiti, it speaks very powerfully on the public opinion of these institutions,” Vochatzer said.

Vochatzer, a San Francisco street artist, incorporates startling images in his compositions in order to grab viewer’s attention and uses distorted depictions to emotionally impact his audience. Vochatzer portrays police officers in a preposterous, often macabre, style as he believes it is difficult to ignore. He feels his images contribute to keeping social and political movements progressing. Vochatzer explained that if street art creates unrest from its harsh content it’s doing its job.

“An objective of protest is to challenge and dismantle destructive structures of power. Right now the violent abuse of authority by police, especially in communities of color, is at the forefront of this,” Vochatzer said. “Street art and graffiti can be powerful tools in reflecting the zeitgeist. When entire cities are getting completely covered in anti-cop, anti-government graffiti, it speaks very powerfully on the public opinion of these institutions.”

Graffiti in the United States has origins in Philadelphia during the 1960s.The roots of the movement can be traced to political and social advocacy. Early taggers spray-painted messages all over the Northern East Coast in order to assert their power over public spaces. Over time graffiti expanded to other major cities in the U.S., Europe and the United Kingdom. As the art form became more internationally popular, artists started conveying lengthier and deeper meanings within their messages.

Graffiti and street art became an outlet for artists to protest against injustices that were present during those times. Historically, street art in San Francisco began as a tool to show solidarity to those whose voices are rarely heard. Early murals and other forms of street art in the city fought for worker’s rights and protested fascism, imperialism and war. Instances of unjustness continue to fuel the creation of street art and graffiti.

Much of the street art found in areas such as the Mission District today showcase support for Black Lives Matter (BLM) and ongoing calls for social justice, Boycott Divestment and Sanctions of Israel (BDS), anti-capitalism and feminist social actions.

Christopher Statton is a curator for Clarion Alley, a small street in the Mission, notable for its politically-charged murals and graffiti.

“We’re seeing street art’s impact on political and social issues with the amount of murals going up after the murder and execution of George Floyd,” Statton said. “These pieces help create momentum. Voices can’t be silenced.”

After George Floyd was killed by police officers, street art started rapidly appearing in San Francisco and Oakland in support of BLM. Floyd’s death also led to a myriad of communities and movements agglomerating in their fight for justice.

Louis Michael, a recent graduate from MidAmerica Nazarene University, was photographed raising a fist in his cap and gown while wearing a BLM shirt during a George Floyd protest. This photograph was later turned into a mural in Oakland.

Michael explained that the abundance of street art has instigated diverse topics of political and social conversations between equally diverse sets of individuals who may not have congregated in conversation otherwise.

Street art, such as the mural painted of Michael, serves an educational purpose. Because this art form brings communities together, various opinions are shared, and its content often presents issues that may not receive much attention.

“If it wasn’t for street art, I would not know about all the people killed by police brutality, and artists do not just share their names,” said Alicie Cruz, curator of Mexichica, a street art Instagram page. “Some artists provide statistics so that we get the facts straight about how many people of color have lost their lives to police brutality and how many people of color lost their jobs during the pandemic.”

Street art and graffiti in support of BDS have also come to light vigorously in recent months. Similar to the BLM-inspired street art, artists showing solidarity of BDS understand the importance of providing knowledge of issues that people may not be entirely educated on. BDS is a Palestinian-led movement that encourages boycotts, divestments and sanctions against Israel.

Street artists have created pieces in response to Israeli Prime Minister Netanyahu’s discussion of annexing a third of what was set aside for a Palestinian state.

Chris Gazaleh, a San Francisco street artist , has created social and political pieces throughout the city for 17 years. Gazaleh, who is a Palestinian-American, focuses his work on raising awareness of the occupation of Palestine.

“Street art provides a story that may not be presented in our history books,” Gazaleh said. “The story that a lot of street artists are presenting is a side that is not known by popular culture. It’s educational because it’s raw and isn’t censored.”

Gazaleh explained that there are plenty of individuals who have become upset with his work. His murals in Clarion Alley have been defaced multiple times.

“My work goes against the beliefs of a lot of right-wing extremists and people who think negatively about my people having freedom,” Gazaleh said. “I haven’t had to deal with too much defacing until recently. The people who do that are basically part of a movement to keep my people silenced.”

Gazaleh explained that this anger sparks conversations and allows those who were previously uninformed on a particular issue to be presented to them in an easy-to-digest or direct manner.

“With street art being viewable to the public, people are seeing it, taking pictures of it, and conversing about it,” Michael said. “And I could just imagine that’s happening every day out there in Oakland, which keeps things moving forward.” 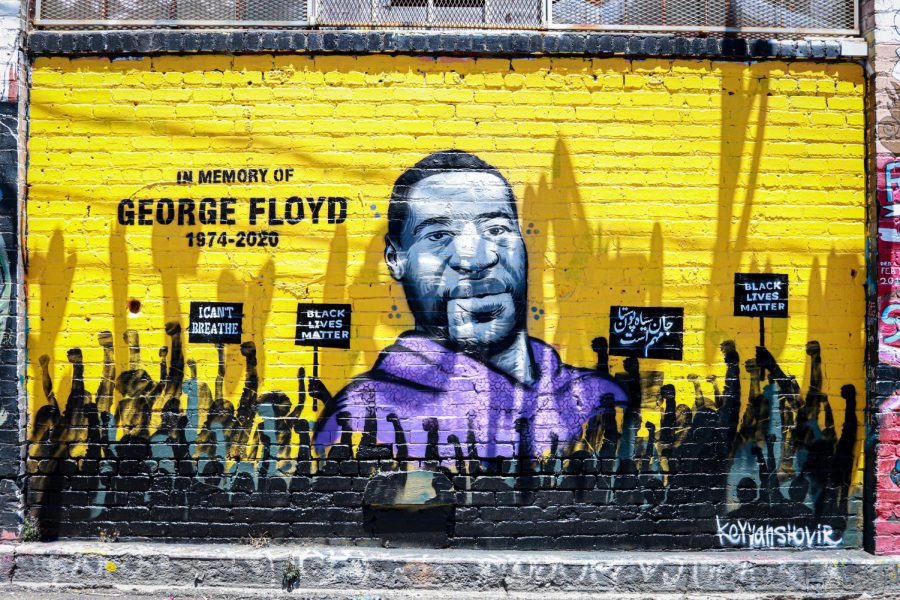 Erica Gray is a 22-year-old journalism student from the Bay Area. She enjoys writing about mental health, art and beauty. When Erica isn't writing articles...