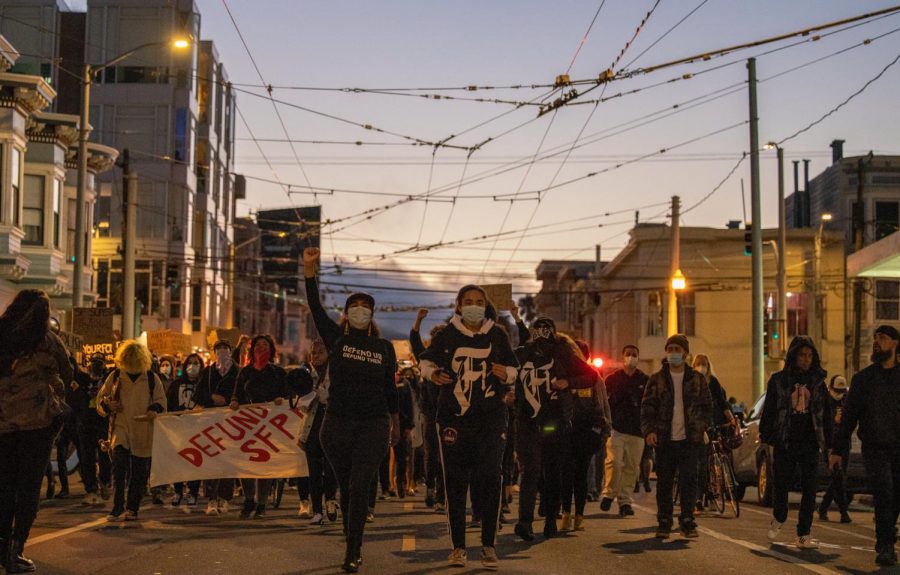 Protesters march down 17th Street in San Francisco after a grand jury verdict decided to not charge any Louisville police officer in the killing of Breonna Taylor on Wednesday Sep. 23, 2020. (Emily Curiel / Xpress Media) 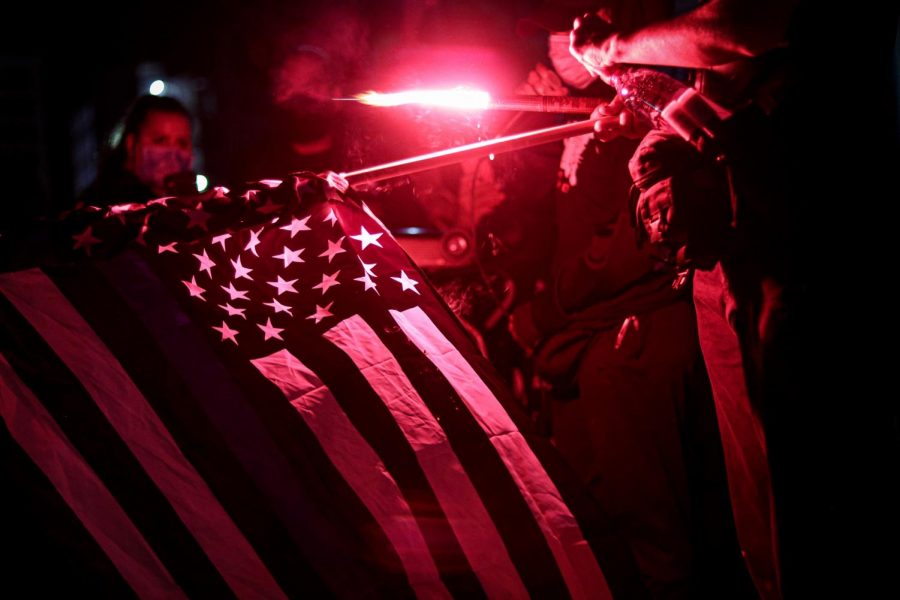 Protesters took to the streets of San Francisco and San Jose to show their disapproval of the verdict for the death of Breonna Taylor on Wednesday evening.

Taylor became one of the faces of police brutality when she was shot five times by Louisville, Kentucky, Metro Police Department officers Myles Cosgrove, Bree Hankison and Jonathan Mattingly at her home on March 13, 2020.

The Kentucky state grand jury decided to only indict one officer, Hankison, with three counts of wanton endangerment of Taylor’s neighbors. This decision caused protests across the U.S.

San Francisco’s protest was organized by Defund SFPD Now, an organization created in June dedicated to the defunding and ultimate goal of abolishing the San Francisco Police Department. The protest started at 7 p.m. outside of the SFPD station located in the Mission District.

Organizer Alex Karim said that while the decision by the Kentucky grand jury was disappointing, it was unsurprising to her. Karim organized the protest for San Franciscans that were unable to make it to the protest held in Oakland that night.

“I think the important thing about reform, right, is that reform is a distraction. And SFPD has been in a reform period for over 50 years, and people are getting harmed. People are getting brutalized every single day, and even just thinking about last year, Jamaica Hampton got shot right here on the Mission. And he lost his leg as a result of that. Right?” Karim said. “It is unacceptable to me and is unacceptable to all of the people here to say that Black and Brown people have to wait to feel safe while we figure out a better way.”

Jamaica Hampton was shot by two SFPD officers near Bank of America on 23rd and Mission Street on Dec. 7, 2019. Ten days after the shooting, SFPD released body cam and CCTV footage revealing that after the officer, Sterling Hayes, fired five rounds that injured Hampton’s leg, another officer — Officer Christopher Flores — fired a round, causing Hampton to collapse. Hampton has been the only police shooting survivor in San Francisco’s Mission district to date.

Karim said that she is unsure if she will be organizing a future event, but she said that she and Defund SFPD Now will not stop being vocal and active until their goals of justice and abolition are achieved.

In San Jose, a protest promoted under the name “Revenge For Breonna Taylor” was organized by Black Liberation and Collective Knowledge Outreach and Human Empowerment for Radical Optimism Tent, activist groups that help protestors and the Black community as they fight for social justice and equality. Protesters met at San Jose city hall and marched to West Julian and St. James streets.

“We have people from Morgan Hill, HERO Tent, and from all across the Bay Area coming together as one for peace, love and equality for the Black and Brown community, and for the outcome of Breonna Taylor’s case. When law enforcement comes out, we’re gonna open up high pressure. This is a peaceful protest, but it’s up – whatever happens, happens,” Paris Browder, a member of BLACK Outreach, said.

“Upon hearing the ruling of the charges against the police officers that murder Breonna Taylor, we knew we were gonna have to protest again because they’re unjustly killing Black people [that] are who innocent. We mobilized because we know what protests need – it needs humanitarian aid, food, water, medical supplies, a place to cool down. On top of that, we’re feeding the homeless that come up to us,” Brodie Storey, vice president of HERO Tent, said.

“This is in an expression of art. So this is how we express the anger that we’ve put through, we’ve been through the injustice of the community, for people who look like you and me, and the black and brown community. They see the pain, they see the staff, they see the anger, they see the outrage, this is to provoke them,” Browder said.

San Jose native Cameron Bauer said he didn’t think twice about coming to the protest with the purpose of demonstrating against systemic racism.

“My ultimate goal is to change the racist system that we have. We will eliminate the racial injustice system. Systematic racism is a very real thing. I think we all are aware that black lives matter. But I think the real thing that we need to do is act on that and change the system. That’s my main goal here,” Bauer said.