An Aztec dancer looks above the trees on 24th street, during a walk towards 24th and Folsom streets on Nov. 1, 2020. (Sebastian Mino-Bucheli / Golden Gate Xpress)

Many Latin American countries welcome November with Dia de Los Muertos, a 3,000 year-old annual celebration of remembrance for deceased family members and friends where family members visit the graves of deceased loved ones on the first two nights of the month. It is believed that on this holiday, the souls of those who have died are able to visit living loved ones.

Creating altars with photos of their loved ones, eating pan de los muertos (bread of the dead), and decorating altars and graves with marigold flowers are ways people commonly celebrate the holiday, along with placing food and drinks for the celebrated to consume when they come for their visit.

“Our celebrations or cuisine or style of dress vary from region to region, Yucatan is no exception to that. We have different ways of dressing. We have our own style of dance called Jarana,” Yin-Lu Diaz said, a volunteer at the Multicultural Center of Marin who explained that no region in Mexico celebrates Dia de Los Muertos the same. “We have our own Dia de Muertos celebration called Hanal Pixan.”

According to an article by tripsavvy, the phrase “Hanal Pixán” translates to “food of souls” in the Mayan language of the Yucatan.

The report goes on to state that, “Many of the traditions surrounding Hanal Pixán are similar to Day of the Dead celebrations in other parts of Mexico. The holiday stretches out over three days. Families set up a table that functions as an offering or altar in their home and also goes to the cemetery to decorate the graves.”

This year was especially different for everyone who celebrates Dia de Los Muertos. The pandemic has forced all celebrations to transition to a remote manner, but that did not stop celebrations across the Bay Area from occurring.

The Mission District was filled with Aztec — otherwise known as  Conchero — dancers, and the streets were decorated with altars, accompanied by flower vendors.

Across the Golden Gate Bridge in Marin County, the San Rafael Downtown storefronts participated by showcasing altars made by community members, along with month long virtual events and a car procession parade. 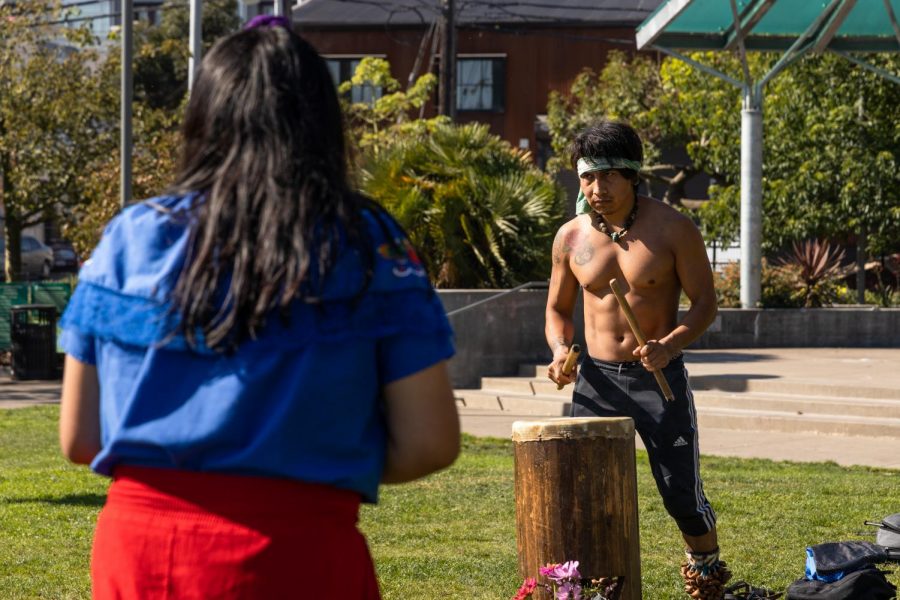 Gallery|13 Photos
Jun Ueda
Rafael Luna plays an accompaniment beat on an Aztec drum at In Chan Kaajal Park in the Mission District on Saturday, Oct. 31, during the dance practice for their performance at the Día De Los Muertos ceremony in the Mission. (Jun Ueda / Golden Gate Xpress)