The Israeli-Palestinian Conflict on Campus: Dialogue

This article is part of a series that seeks to explain and examine aspects of how issues around the Israeli-Palestinian conflict impact students, faculty, the university administration and academic programs. It is the work of over 80 interviews and numerous conversations that took place over a year. Taken together, these articles are meant to provide an overview of certain aspects of these tensions on SF State’s campus — and are not comprehensive. 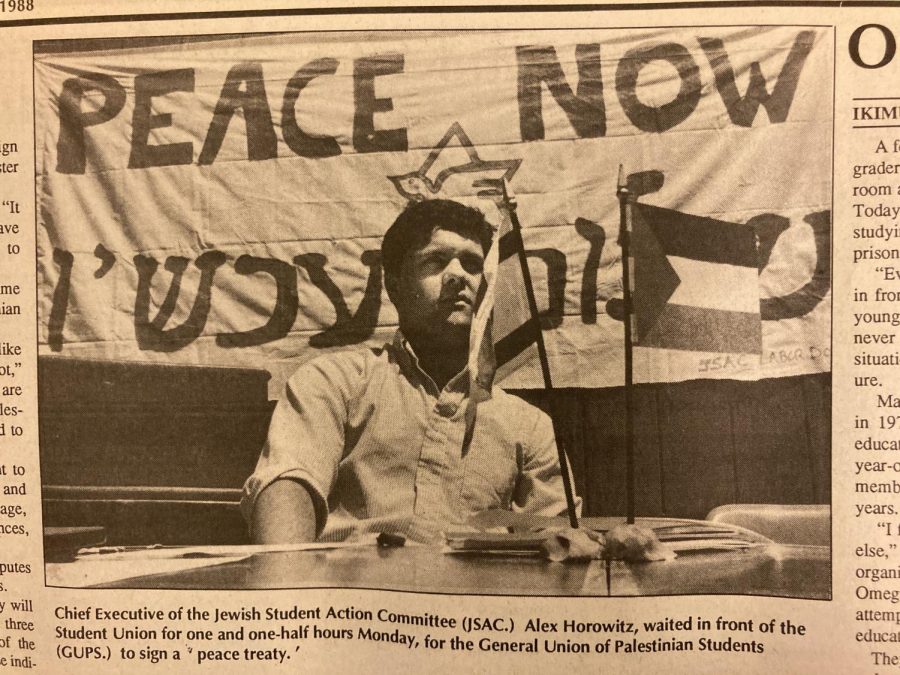 Jewish Student Action Committee Chief Executive Alex Horovitz waited in front of the Student Union for one and one-half hours for the General Union of Palestine Students to sign a peace treaty. (Golden Gater 1988)

In May 1988, five years before the start of the Oslo Accords, Jewish students sat at a table underneath a banner with the phrase “Peace Now” in large fonts both in English and Hebrew. A dove was painted in the middle of the two slogans, and on the table were small Israeli and Palestinian flags.

Those in the now-disbanded Jewish Student Action Committee at SF State urged Palestinian students to sign their version of a peace treaty to send to Israeli and Palestinian leaders. The treaty was to act as a demonstration of peace on campus.

“We’ve worked out our differences, why can’t you?” JSAC Chief Executive Alex Horowitz said while tabling in 1988.

Palestinian students quoted said they were under no obligation to talk to other student groups, and that they viewed the symbolic peace treaty as a publicity stunt that detracted from the Palestinian students, whose family members were being killed by Israeli soldiers during the then-ongoing first Intifada.

“They (JSAC) want it to look like they are for peace and we are not,” Sami, a spokesperson for the General Union of Palestine Students, said in 1988. “The same time you are asking me these questions, the Palestinian people are being subjected to genocide.” 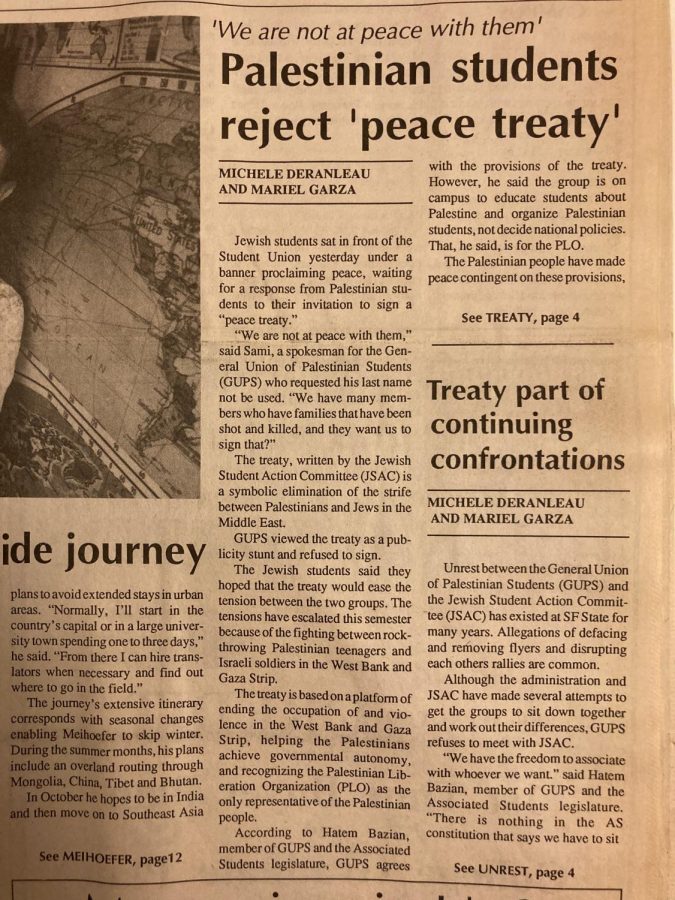 Gallery|4 Photos
Two Golden Gater articles about the proposed peace treaty is part of continuing confrontations between JSAC and GUPS.

Shahni Ben-Haim, a former member of SF Hillel who graduated in 2018, said the climate and openness to dialogue in her current home in Tel Aviv, Israel, is much more receptive than what she experienced in her time on campus.

“With my background being Israeli American, those discussions weren’t welcomed, which is unfortunate as I feel if anything, I could have learned from my peers — even if it meant to agree to disagree,” Ben-Haim said.

Many blame anti-normalization, in which many Palestinians and other Arabs, Muslims or advocates of justice in and for Palestine refuse to normalize relationships with supporters of Israel and Zionism, due to the ongoing occupation impacting Palestinian students and their families.

“I believe people who say there needs to be dialogue don’t know the full history of the situation,” said Ariana Khateeb, a current Palestinian student. “So it’s very inappropriate to ask for dialogue because Palestinian students and Palestinians in general have been brutalized, killed, targeted and oppressed for the entire history between the two sides … It’s not a really productive dialogue when one side has to defend its right to exist.”

Anti-normalization has also been reaffirmed by anti-Zionist Jewish students and others who see attempts at dialogue by SF Hillel as hypocritical, because of Hillel International’s Israel guidelines. These guidelines also exclude anti-Zionist Jewish students, who often fear ostracization from their own community and families because of their solidarity with and support of Palestinian students.

Hillel International’s standards of partnership around Israel are clear. They state that Hillel chapters will not partner with, house or host organizations, groups or speakers that violate their Israel guidelines. These include those that “[deny] the right of Israel to exist as a Jewish and democratic state with secure and recognized borders,” support the [Boycott, Divestment, Sanctions] movement or “exhibit a pattern of disruptive behavior toward campus events or guest speakers.”

“I am unable to accept Hillel’s conditional support for its queer student group. I firmly believe that Hillel International’s Standards of Partnership present a litmus test for belonging in the Jewish community that is reductionist and exclusionary.” pic.twitter.com/mZZcAs8ezy

According to SF Hillel Executive Director Rachel Nilson Ralston, SF Hillel brings a variety of speakers to express student views through different perspectives on topics such as Israel, Palestine, Zionism and the conflict overall. SF Hillel and Hillel International “reject the BDS movement because it squashes space for dialogue on campus and presumes a singular view about the resolution to the Israeli-Palestinian conflict,” as she said SF Hillel opts for events that promote conversation.

Some looking to interact with others have called upon the administration to mediate dialogue.

Since starting at SF State in 2019, current university President Lynn Mahoney has met with students in GUPS and SF Hillel separately. Acknowledging that there will be strong disagreements, she said she wants the campus to be a place for courageous conversations between students.

On Nov. 18, the Associated Student governing board voted 17-2 to approve a resolution that calls on the administration to not invest in multinational and Israeli companies complicit in human rights violations, from a list compiled by the United Nations. The virtual meeting drew both passionate and bigoted comments from attendees, resulting in the board disabling the chat.

“San Francisco State University has had a decades-long challenge creating safe space for discussions about the Israeli-Palestinian conflict,” Mahoney wrote to Associated Students on why she cannot support the resolution. “We need courageous conversations, and we need to listen to one another without demonizing each other.” 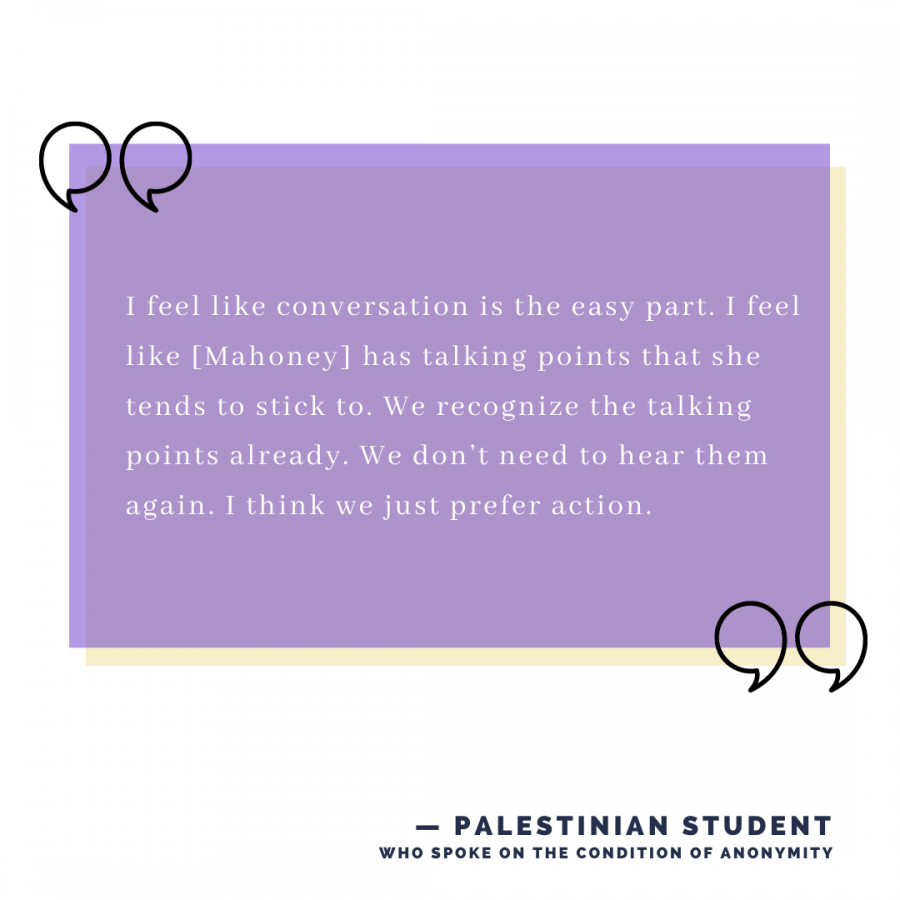 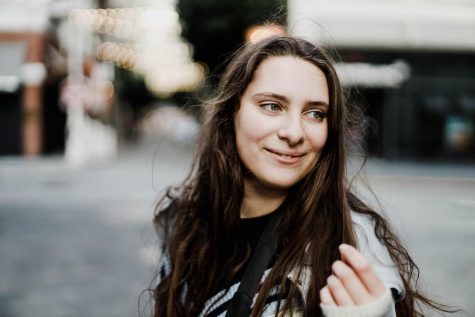 Paisley Trent
Paisley Trent is a reporter, writer and aspiring visual journalist finishing up her last semester at SF State where she studies journalism and international relations. Spending the last year on a project about issues around the Israeli-Palestinian conflict on campus came from a long learning process and a desire to change the way student communities on campus are covered. She worked to consider the larger context and consequences while localizing what is often seen as only a foreign policy or international issue, but in reality has tangible impacts on campus.