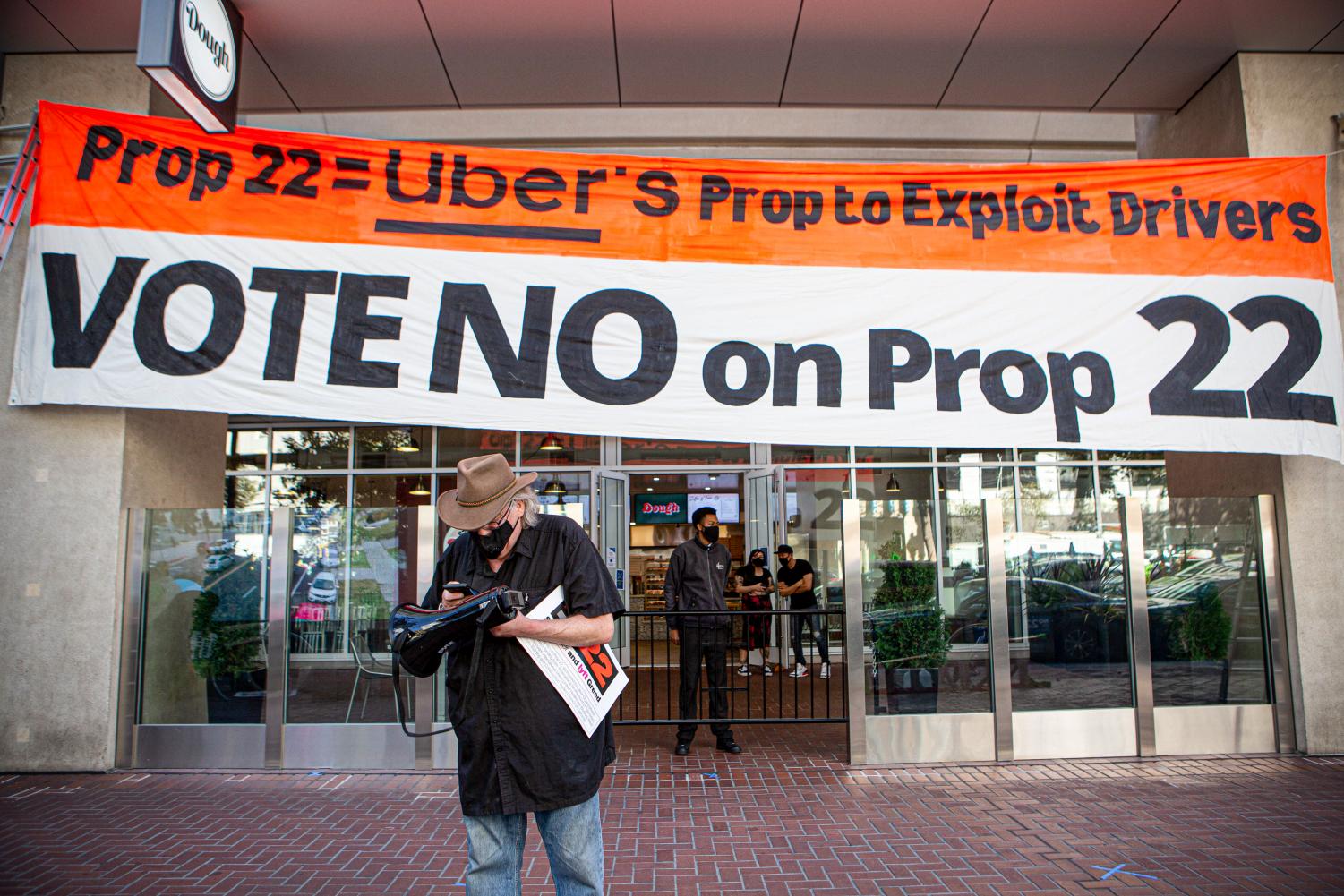 Uber alongside a few other rideshare companies have poured $205 million into the endorsements of “yes on prop 22”. Compared to the past propositions that were being fought within the state of California this is one of the most costly. (Sean Reyes / Golden Gate Xpress) (Sean Reyes)

Uber alongside a few other rideshare companies have poured $205 million into the endorsements of “yes on prop 22”. Compared to the past propositions that were being fought within the state of California this is one of the most costly. (Sean Reyes / Golden Gate Xpress)

Drivers like Cherri Murphy, who’s been a Lyft driver since 2017, was devastated to hear the outcome of proposition 22. She explained that it was a dangerous law that would be going into effect.

The state of California voted yes to proposition 22, which would classify app based drivers as independent contractors rather than employees, just a day after the election in Nov. The results were close with 58.6% voting yes and 41.4% voting no.

“Voters in California were inundated with ads that were deceptive on promising a living wage and flexibility and greater benefits. And so they believed that they were ensuring drivers a better future in the middle of a pandemic and recession and that’s actually the opposite,” said Murphy.

The results of proposition 22 and the surge of app based drivers during the pandemic has led April Shimabukuro to find another minimum wage job due to struggling to make ends meet as a driver.

“Before I started working through the UPS store I was averaging about 50 to 70 hours a week. Sometimes I would sit for hours and make no money,” Shimabukuro said. “There’s nothing I could do about it because I’m only paid for being engaged time. I’m only paid when I accept an order and to the point where I drop off that order.”

Uber alongside a few other rideshare companies have poured $205 million into the endorsements of “yes on prop 22”. Compared to the past propositions that were being fought within the state of California this is one of the most costly.

“Anytime that a corporation is willing to spend $205 million, the most spent on any ballot campaign in US history to bankroll this proposition. It’s because at the end of the day it’s about profits and it’s about overriding profits over human people,” said Murphy.

For drivers like April Stephens, she was relieved to hear the news of proposition 22. Stephens explains that her past injuries have made it difficult for her to keep other jobs, that’s why she enjoys the freedom of driving through app based work.

“I can work whenever I want to work and for how long I want to work. Then if I have a day where I’m not feeling good, or something else is going on I’ve got to take care of, I just don’t work. I like the freedom,” said Stephens who has been a driver for seven months.

Shimabukuro explains that drivers who have only been at the job for a short amount of time do not realize the long term effects that this upcoming proposition will bring, that there is a whole lot more to uncover.

“I think they have had the wool pulled over their eyes and believe like “hey look at I’m making $30 an hour and it’s like, no honey it just looks like that, in the long run, you’re making minimum wage or less,” said Shimabukuro.

With proposition 22 essentially excluding app-based transportation companies from AB 5, Murphy explains the importance of continuing to fight for basic rights as a driver.

“Uber has essentially bought itself the law and has stripped away or attempted to strip away dignity and respect. We will continue to fight for that to fight for human rights, such as the ability to pay for their rent. The ability to be properly protected in the middle of a pandemic,” said Murphy.