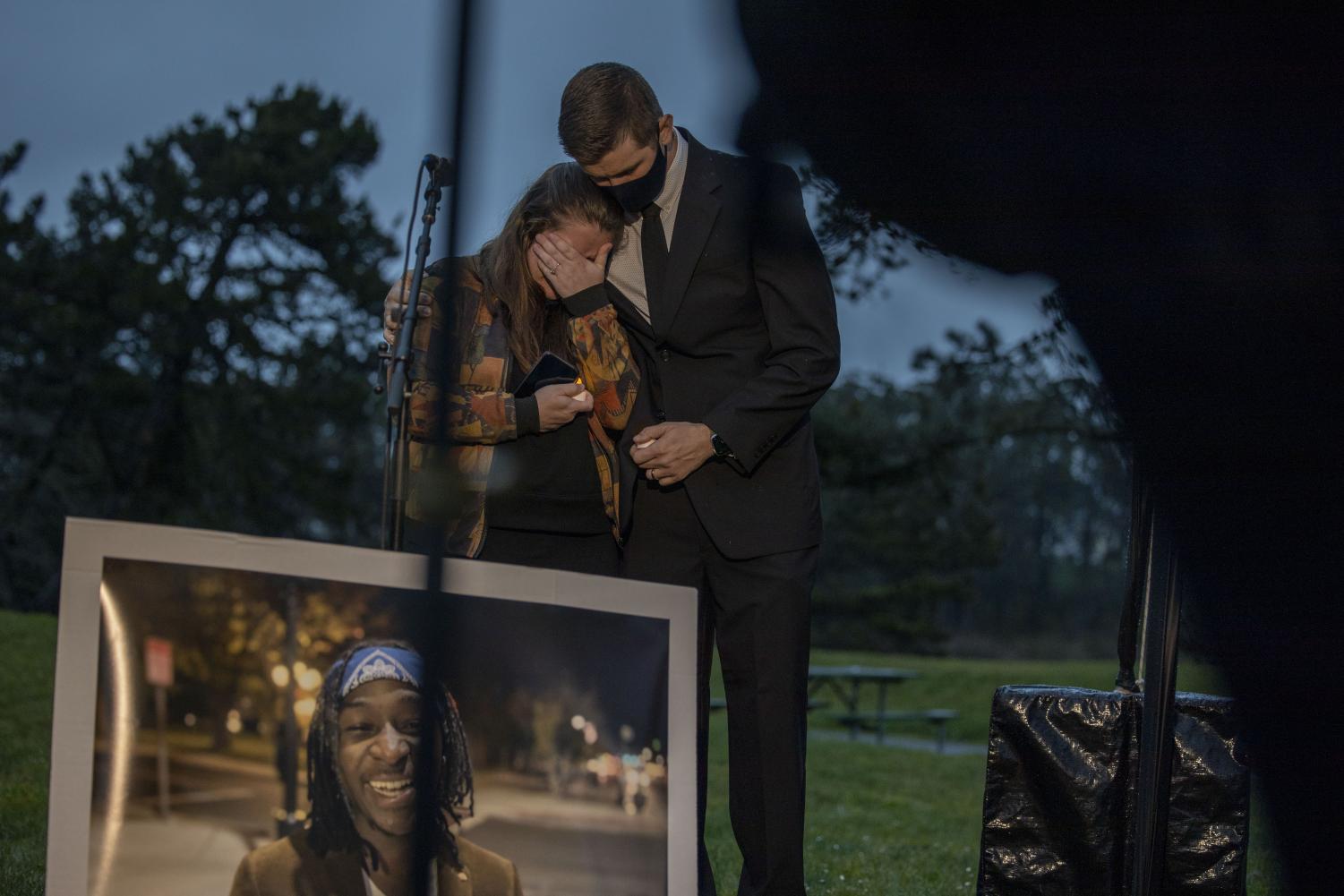 A vigil celebrating the life of a 26-year-old pedestrian who was struck and killed in an eight-car car crash was held at the Lake Merced Park on Thursday night, highlighted with calls for answers from the San Francisco district attorney.

Loved ones, members of law enforcement and residents stood and spoke on the life of Sheria Musyoka, who had just moved to San Francisco from Connecticut eight days before the accident that occurred on Feb. 4.

Musyoka was the lone fatality after Jerry Lyons, a 31-year-old San Francisco resident, crashed a 2003 Ford Explorer he had stolen into seven other vehicles in the area of Higuera Avenue and Lake Merced Boulevard. San Francisco police responded to the incident at 7:53 a.m.

“You couldn’t be around Sheria for longer than a few moments without being impacted by him,” Musyoka’s wife, Hannah Ege, said while remembering her husband of a year and a half. “His smile was welcoming and he often lightened the mood with his jokes and infectious laugh.”

Ege added that Musyoka, a graduate of Dartmouth, was excited to begin life in San Francisco and looked forward to contributing to his new community.

“Sheria also had so much stuff of character – he cared deeply for his fellow humans and thought about social and political issues and how he could best serve his community,” she said. “We had so many hopes of starting our lives being active with our new community and joining groups and organizations to fight for a better world for our son.”

“We are truly sorry,” Miyamoto said. “He represents … something that was truly special. And for the few moments here, in San Francisco and our community, be part of our specialness, our values and our vibrancy. It will be something that is missed and we will continue to carry in our hearts as we try to do things to make everyone safer, everyone better in San Francisco.”

Some individuals, like Wendy Robin of San Francisco, spoke on the feelings of déjà vu that residents have felt through the spike in crime around the city. According to SFPD’s crime dashboard, burglaries have increased 42% while motor thefts have increased 12.1%.

“We don’t want this to happen anymore,” Robin said referencing the fatal hit-and-run on New Year’s Eve in which Troy McAllister killed two pedestrians at Second and Mission Streets. “I feel like we just came off the memorial for Hanako Abe and Elizabeth Platt, which just happened a couple of weeks ago. I feel like it’s a one, two sucker punch here. Because it was the same story of someone running a red light who had a big arrest record.”

Both individuals involved in the accidents, Lyons and McAllister, had been previously incarcerated and were released in the months prior to the incidents which left pedestrians killed.

For Officer Josh Cabillo, director of the San Francisco Police Officers Association, the burden of crime by these individuals has fallen on the innocent due to the failures of San Francisco’s elected officials.

“Why do innocent people always have to carry, bear and pay the heaviest consequences? Why are innocent victims paying the burden of crime in our city?” Cabillo said. “We have elected officials who are almost celebrating crime and giving prizes to criminals in forms of gift cards while we have innocent families burying their loved ones. It’s not how it should be.”

Cabillo said that he believes in second or even third chances, but there needs to be accountability that extends all of the way to the desk of District Attorney Chesa Boudin.

“Where is the line? The public needs to know,” Cabillo said. “There needs to be transparency, the DA ran on transparency, accountability and making changes to the system. What does that mean? We don’t know. We’re confused and the victims are paying the heaviest price and are burying their loved ones.”

Lyons, according to Cabillo, had been arrested twice on carjackings since October and had been released both times leading up to last Thursday’s accident that killed Musyoka.

According to the California Department of Corrections and Rehabilitation, since April 2020 there has been an increase in the release of inmates in an effort to protect staff and inmates alike from the coronavirus pandemic. The CDCR evaluates these inmates who are released from their 35 institutions based on if they have 180 days or less to serve on their sentence, are not currently serving time for domestic violence or a violent crime, have no current or prior sentences sex offender registry or not having an assessment score that indicates a high risk for violence.

For Robin, the pandemic is not enough reason to allow repeat offenders out on the streets.

“It’s the same story again, [Lyons] ran a red light and had a big arrest record, so what do we think about this? I don’t think that people with five, six or seven arrests should be allowed to be out on the streets doing this,” she said. “I called San Mateo Police this week and they explained to me that COVID is the reason why they are releasing people from jail… I don’t think it’s right. Felonies have been turned into misdemeanors. I’m wondering whether we need a three-strikes law back again against misdemeanors which are actually felony crimes at this point.”

According to the California Courts, the “Three Strikes and You’re Out” law, which was enacted in 1994 after Proposition 184 was passed and signed into law by then-Governor Pete Wilson, required a defendant convicted of any new felony who had been previously convicted of a felony to be sentenced to state prison for twice the term otherwise provided for the crime. This law also provided that if the defendant with two prior strikes was convicted of a felony, they would face a state prison term of at least 25 years to life.

Robin, who is an admin for a NextDoor group called ‘Reducing Crime in SF – community discussion action’, said she hopes those who are convicted more than three times should not be allowed to roam free on the streets.

“You get three chances and if you don’t you go back to jail. You can get put in programs for detoxing and job training or whatever you’re going to do, but you should not be allowed out here to continue to hurt the public like this because it gets worse and worse and worse and then we end up with this,” Robin added. “He had a big track record, so did Troy McAllister, why are we putting up with this anymore?”

For Cabillo, the policies, which allowed McAllister and Lyons back on the streets, although impacted coronavirus have been inclining this way since before the pandemic began.

“We’re all for reform, things need to be changed and we’re for it, however when someone is showing a pattern of crime over, over and over and to be completely let off – I think COVID is a factor that’s one – but two, before COVID, these things were happening,” he said. “I believe in second chances, and sometimes third chances however how many chances are you going to give? Do we wait till somebody dies? Is that when we say, ‘No more chances’?”

Efforts to reach District Attorney Chesa Boudin for comment before the publishing of this article were unreturned. 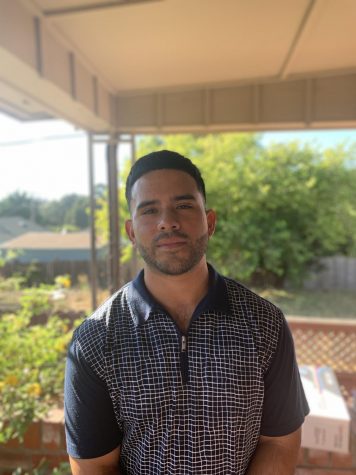 Joel Umanzor Jr. is studying Print and Online Journalism with a minor in Latino/a studies and is in his Senior year. Umanzor Jr. is also a part-time reporter...

Murals are more than just works of art