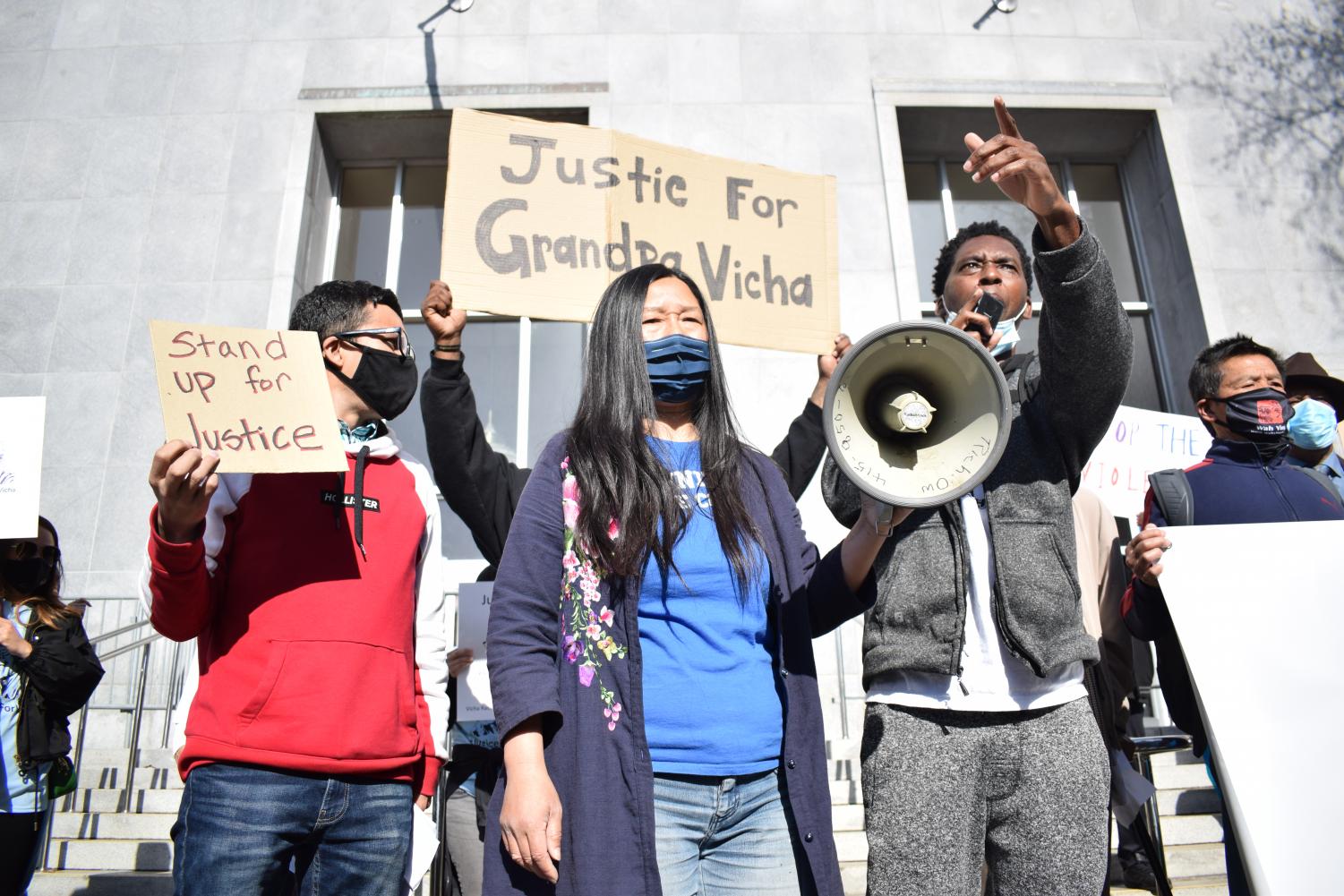 On March 4, nearly 100 people gathered in front of the Hall of Justice for social justice

Nearly 100 Thai Americans gathered in front of the Hall of Justice in San Francisco for Vicha Ratanapakdee, a Thai American who was murdered on Jan. 28. Among the many event participants, many non-Asian people also came in support of seeking social justice.

Vichar Ratanapakdee was an 84-year-old Thai man living in San Francisco. The morning of Jan. 28, a man ran across the street and shoved Ratanapakdee to the ground, resulting in his death. The death of Ratanapakdee sparked a vocal response from the Asian American community, culminating in Thursday’s event.

Since the outbreak of COVID-19 in the U.S., former President Trump insisted on calling the Coronavirus the “China Virus,” repeating that the virus originated in China. In addition, a series of incorrect statements against Asians in American society have led to a large number of “anti-Asian and attacking Asian behaviors” in American society.

Jerry Rasuru, organizer of “Justice for Vicha Ratanapakdee,” organized the statewide event from Los Angeles, where Rasuru is from, to San Francisco to promote justice and the protection of Asian communities.

“ I want to build justice for Vichar. As a Thai American, I was very distressed and angry about what happened, so I want justice for Vichar,” Rasuru said. “As Asian Americans, we too often head down, but not anymore. So this event is to organize the community to mobilize support and to demand accountability for justice for Vicha. So we want to go forward to the future and make our voice heard. The Asian Americans will no longer be the minority that will be started to speak out anytime and help out our community.”

“I want them to improve programming and social services to the community. The Asian Americans have unmet needs,” Rasuru shouted at Thursday’s demonstration.

Claudia Kornchaya is the board member of Thai Unity Community, she is also the person who recruited volunteers for this event.

“To have people roaming around unable to control themselves and unable to control their behavior and put an anger and danger to other people out on the road is not right. And we need that justice to help people that are walking around in the street to have their safe space. Secure space in San Francisco,” Kornchaya said to these people who are attacking Asians because they hate Asians.

Mike Needham, a white supporter and not an Asian American, also came to the scene to support this event. Needham also stated that he and Ratanapakdee lived in the same area.

“I think this one for me really hit home too, because I live not too far away from where it happened, so the video itself just disturbed me very much,” Needham said. “It’s really a terrible thing to see. Especially, elderly population so vulnerable. I just think it’s important that we get out there as a community and rally more for this cause. you’re seeing a little bit catch a little bit more steam now. I mean overall really not that many people are talking about it.”

Joanna Au is a Vietnamese American. Although the deceased and the activities were initiated mainly for the Thai community in the United States, Au stated that her support was not only for people from certain countries.

“I think it was horrible. I don’t think any human being anyone of any race should deserve that at all, especially an elder,” Au said. “We grew up in an Asian community knowing that we have to respect our elders and seeing something like this and the fact that his death was pronounced a couple days after it was, it was disgusting to see.”