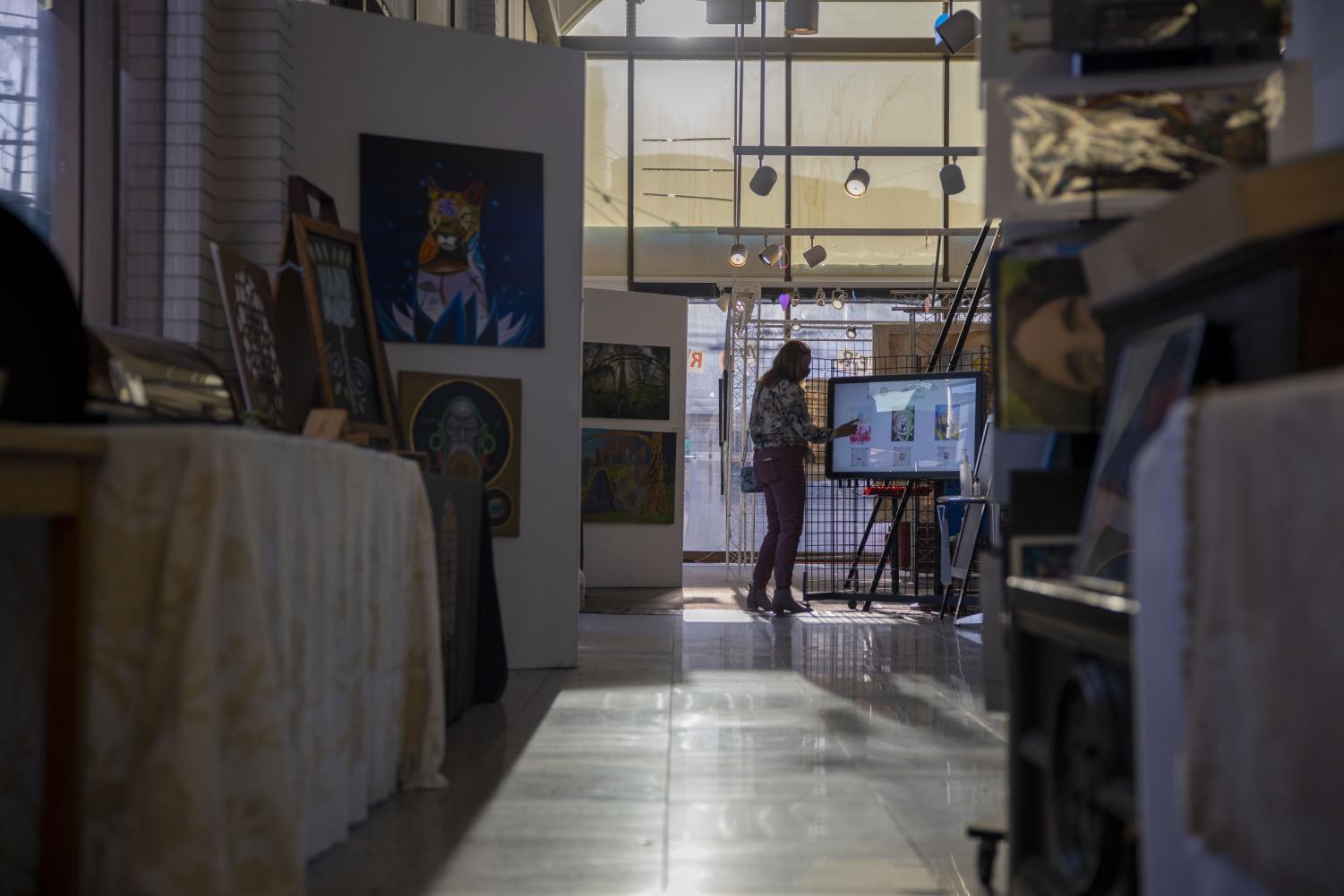 An art enthusiast scrolls through a touchscreen monitor to view local artists whose work has been converted into NFTs at Local Maker Mart Gallery on March 25. The gallery was presented by Recreation Sound Systems. (Emily Curiel / Golden Gate Xpress) (Emily Curiel)

An art enthusiast scrolls through a touchscreen monitor to view local artists whose work has been converted into NFTs at Local Maker Mart Gallery on March 25. The gallery was presented by Recreation Sound Systems. (Emily Curiel / Golden Gate Xpress)

For the past couple of months, NFTs have gained traction as more of the public gravitate toward the latest cryptocurrency trend.

NFT, which stands for non-tangible token, acts as digital collectibles that people can buy and collect for monetary value. Websites such as OpenSea and NBA Top Shot are just a few of the marketplaces where people can purchase NFTs.

Works such as “Everydays: The First 5000 Days” by digital artist Beeple have sold for $69 million on NFT marketplaces. Artists like Kings of Leon and retired UFC champion Khabib have also entered the NFT realm as well with respective releases.

A local art gallery in San Francisco, known as Local Maker Mart, hosted on March 25 a first in San Francisco — an online NFT auction hosted on Twitch where viewers could bid and buy on various artists’ works. The market, located between Green Street and Columbus Avenue in the North Beach neighborhood, hosted the auction as a way to help segue local artists into the NFT scene.

Gregory Castellanos, the CEO of the gallery, views the recent trends of NFTs as a signal for a new future in art.

“I think it’s growing and it’s going to expand into the mainstream. I feel like there was this pivotal point where it’s like, if this was going to fizzle, it would have gone away rapidly,” he said. “Now I feel like it’s not only here to stay, but it’s pushing [NFT’s] forward as a technology and making it accessible for artists,” he said.

The gallery, sponsored by NFT exchange platforms Digitalax and OpenSea, featured a multitude of local artists such as Liam Skye and Akeem Raheem. For Raheem and Skye, the event was a chance to get in on a craze that has been steadily building these past few months.

“I had heard some rumblings about NFT’s and what they were, and how there was a digital art scene that had already erupted, and I was kind of behind the ball,” Raheem said in regards to his knowledge about NFT’s before participating in the auction.

Prices for the NFTs displayed were around $500 to $1,000 in value. Those who attended the auction were able to purchase the NFTs through QR codes that the gallery had displayed on monitors. Scanning the QR code would then take users to the OpenSea marketplace where buyers could place bids on the NFTs, as well as view the moving elements for some of them.

Each of the NFTs were displayed on a touch screen monitor where visitors could click and read about the premise and motivation for each body of work.

Despite having his art displayed as an NFT, artist Liam Skye said he was still skeptical about the whole concept as a whole.

“It’s kind of scary because you have no idea who it’s going to go to, like the whole thing about, who owns the art, gives it value,” he said. “I’m not going to know who’s going to be trading it. It’s not the same as having the person coming react here or you sell it to them and know who you’re selling to,” he said.

Because of the uniqueness and limited quantity, artists such as Raheem feel that there has to be some significance to the work chosen to later be minted and turned into an NFT.

“I try to pick and choose because, one, I got too many pieces to mint them all, and two, I just want something that I just want pieces that are really reflective of the urban culture that we all know,” he said.

The term minted is when an artist puts their work onto the blockchain, which is a digital record book of sorts related to cryptocurrency, showing all the transactions made on the network. When an artist mints their work, they are making their work unchangeable. This gives NFTs the uniqueness about it in that there’s nothing like it on the blockchain. It’s like a one of one for a fashion item or someone else of monetary value.

Castellanos hopes to make the auction a recurring event as the popularity of NFTs grows.

“I’m excited about this first one. It’s always a learning experience the first time you do any sort of event and we’re kind of pioneering new waters here,” Castellanos said. “So I’d love to see this grow and evolve. I’m hoping that we find a lot of success in our first auction and we’re hoping to start doing this more often and putting this into the regular schedule if it’s something that we can help artists achieve success with.”