President Biden unveiled a first-of-its-kind infrastructure plan on March 31, offering both traditional and progressive takes on rebuilding the nation.

The proposal, titled the American Rescue Plan, seeks to spend over $2 trillion “to reimagine and rebuild a new economy,” and promises to create millions of jobs to compete with China, according to the White House Briefing Room.

The plan can largely be broken down into five spending components. These include:

Within this spending, the plan seeks to transition the nation toward an electric vehicle market. Biden hopes to establish 500,000 electric vehicle chargers by 2030 across the country — an effort of the plan to reduce the impacts of climate change. This comes hand-in-hand with Biden’s pledge to cutting the country’s greenhouse gas emissions in half by 2030.

Other notable spending components of the proposal include funding Historically Black College and Universities and minority-serving institutions, in part in an effort to eliminate racial and gender inequities in STEM fields; and developing programs to address inequities brought about through historic transportation investments, such as the building of highways.

The bill has been met with fierce opposition from congressional Republicans, with most Senate Democrats in support of the bill. Moderate Democratic Sen. Joe Manchin referred to Republicans’ counter-offer — $568 billion, a quarter the size of Biden’s and smaller than former President Trump’s $1.5 trillion plan in 2018 — as “a good start.” Rep. Alexandria Ocasio-Cortez said that the bill is “disappointing” in size, she acknowledged the influence and partial adoption of components of the Green New Deal.

CLICK: See how Biden’s plan, if passed in its entirety, would affect various parts of the nation. Mobile users must download the Google Earth app to view 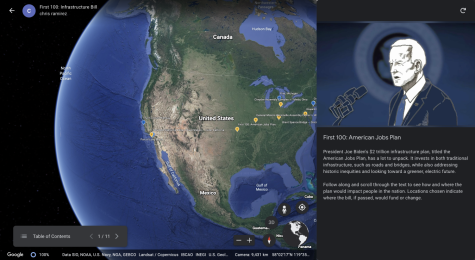