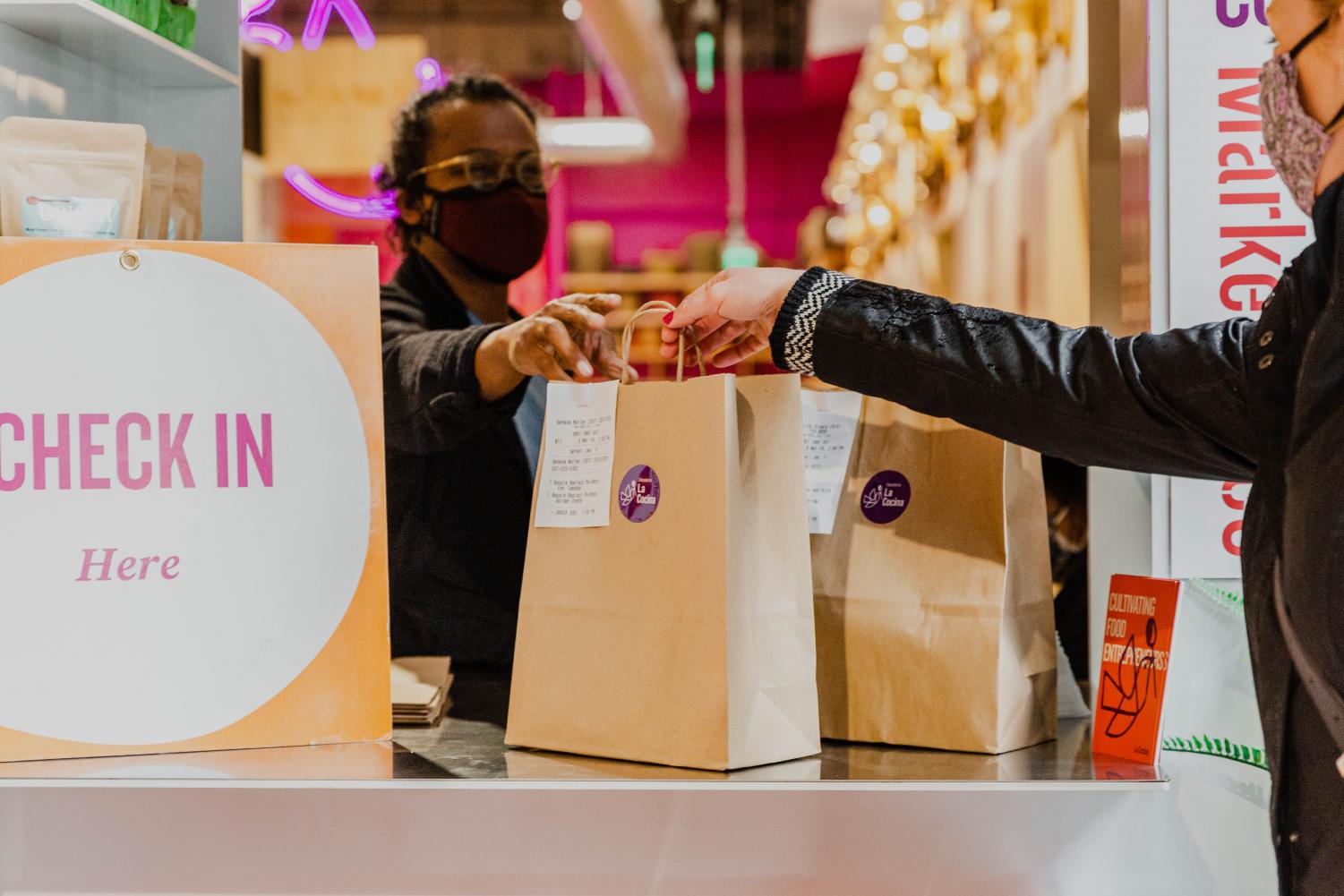 A transaction with a customer inside the La Cocina Municipal Marketplace, a new food hall in the Tenderloin made up of women and immigrant owned restaurants. (Courtesy of Erin Ng / La Cocina Marketplace) (Erin Ng)

A transaction with a customer inside the La Cocina Municipal Marketplace, a new food hall in the Tenderloin made up of women and immigrant owned restaurants. (Courtesy of Erin Ng / La Cocina Marketplace)

When Wafa Bahloul was deciding what to name her restaurant, she landed on Kayma, an Arabic word for a nomadic tent that goes from area to area sharing food. The name holds particular resonance to the values and mission of the restaurant’s site, the La Cocina Municipal Marketplace.

As she puts it, “We are in California to share our food, our tent.”

Kayma is one of six women-led restaurants currently in the marketplace, which opened its doors April 5 in the Tenderloin, after delayed construction due to the coronavirus pandemic. The seventh restaurant, Bini’s Kitchen, and cocktail bar La Paloma will join when indoor dining is fully reintroduced to San Francisco sometime this summer.

All of the women are graduates from the La Cocina incubator program, a project developed as a way to provide technical assistance to growing women- and immigrant-owned businesses, and for many, this is their first brick and mortar.

The program developed out of grassroots efforts in the early 2000s that interviewed women who were selling food informally, such as street vendors, and tried to understand why they weren’t formalizing.

A big part of the research determined that it was because of a lack of affordable kitchen space, with which La Cocina works to provide them.

Folks who have been cooking for friends, families and churchgoers for years come to La Cocina ready to formalize their business. La Cocina then connects them with technical assistance on marketing, websites, sourcing ingredients and distribution to help them grow into successful businesses.

“These women are already incredibly talented and passionate and smart,” Maisel said. “We’re really just providing the tools that they have not been given due to the history of exclusivity and inequity in the business ownership space.”

Bahloul, despite having been trained in cooking for much of her life, said she could not have gotten this far without help from La Cocina.

Previous to the pandemic, La Cocina provided a lot of corporate and event catering, yet because of COVID-19 they pivoted to a food insecurity catering model. This model has them partnering with third-party funders who pay La Cocina entrepreneurs to create meals for food-insecure populations.

“It’s been a really beautiful way for the entrepreneurs to connect to the community, build rapport and to be able to give back,” Maisel said.

Each of the restaurants in the marketplace is also offering accessible meals in an effort to better serve the community. Boug Cali has a $5 plate consisting of red beans, rice and andouille sausage. Kayma has a hearty lentil soup with a slice of house-made bread.

While located on a corner that could benefit from positive activation, Maisel rejects the notion that La Cocina is coming in to ‘revitalize’ the Tenderloin.

“The neighborhood has already been working incredibly hard forever to advocate for more support, both government and just locally in the public, and we’re just joining that fight to provide another resource through food and workforce development and physical communities,” she said.

The food hall will be just one aspect of the marketplace when it fully opens to the public.

There will also be a free communal corner inside that will have access to libraries, a mini computer lab, a community room and a kiosk. The goal is to create an inclusive space where people feel safe and welcome to gather around food, and ultimately, to prove that a shared risk, shared cost model can promote anti-gentrification development, led by women of color.

The community response and engagement since the opening have been positive.

“The Tenderloin is really wrapping our arms around this project because we know it needs to be successful and it’s really rooted in this community,” District 6 Sup. Matt Haney said. “Those of us who live here or work here are trying to provide as much support as we can.”

The current site of the marketplace, 101 Hyde St., is slated for affordable housing by 2026. La Cocina is activating the building in the meantime, and as of right now, there are no detailed plans for future development.