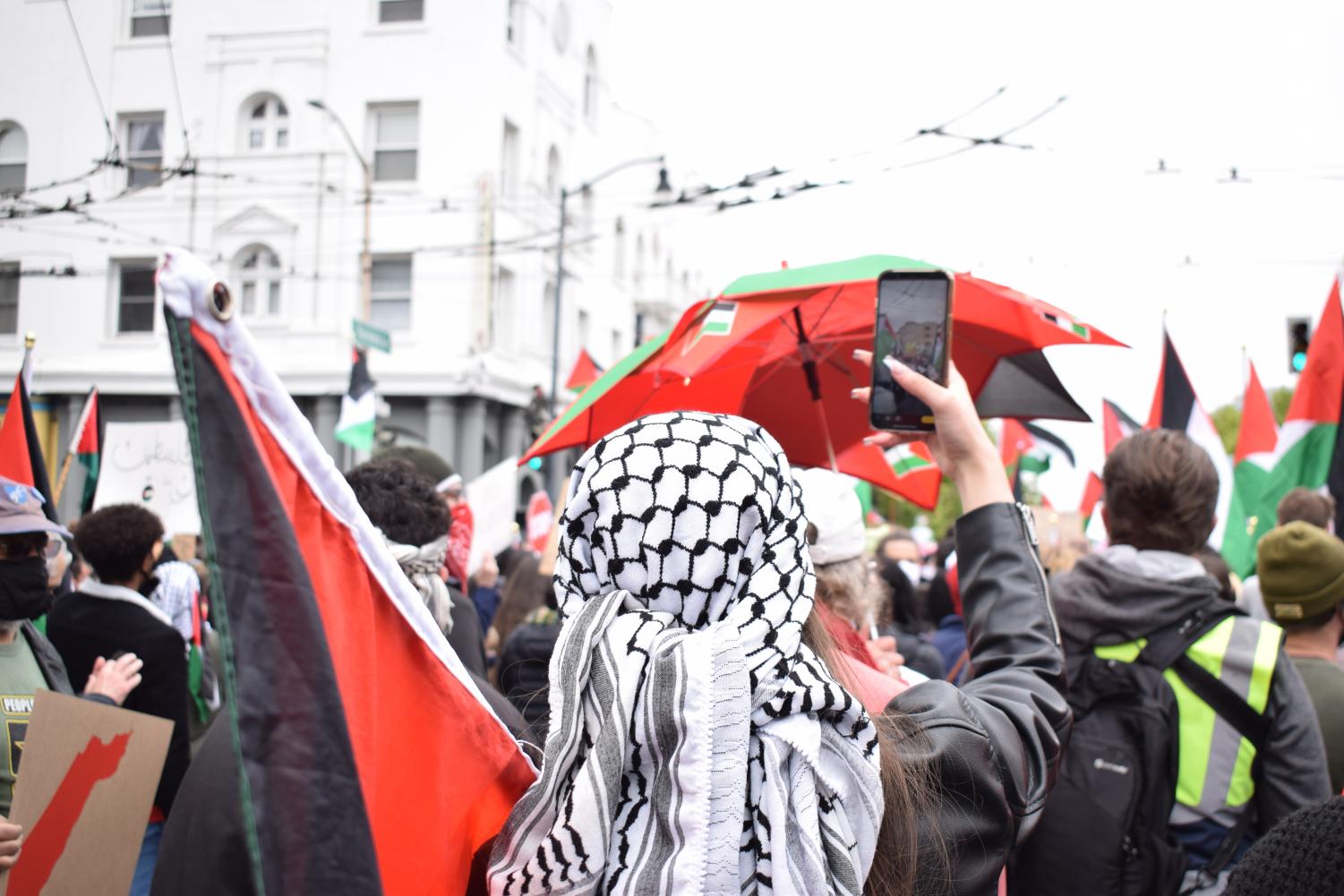 Demonstrators gathered at the intersection of Valencia and 16th streets on May 15, the commemorative date of the Nakba. The Nakba, which translates to ‘catastrophe’ in Arabic, acknowledges the displacement of roughly 700,000 Palestinians in 1948, a result of Israel’s founding. (Lucky Whitburn-Thomas / Golden Gate Xpress) (Lucky Whitburn-Thomas)

Demonstrators gathered at the intersection of Valencia and 16th streets on May 15, the commemorative date of the Nakba. The Nakba, which translates to ‘catastrophe’ in Arabic, acknowledges the displacement of roughly 700,000 Palestinians in 1948, a result of Israel’s founding. (Lucky Whitburn-Thomas / Golden Gate Xpress)

Thousands rallied at the intersection of 16th and Valencia streets on Saturday to show solidarity and raise visibility of the violence against Palestinians in Gaza and the West Bank.

The protest, organized by the Palestinian Action Network, an alliance of local organizations and individuals advocating for Palestinian self-determination, fell on the 73rd anniversary of the Nakba. The Nakba — the Arabic word for “catastrophe” — refers to the displacement of roughly 700,000 Palestinians in 1948, a result of Israel’s founding.

Saturday’s “All out for Palestine” event specifically highlighted the heightened tensions between Palestinian territories and Israel.

These tensions have existed for decades — both in the region and exemplified across U.S. college campuses — but came to a head again on May 2 after the Jerusalem District Court ruled in favor of several settler organizations.

These organizations alleged land in the East Jerusalem neighborhood of Sheikh Jarrah belonged to Jewish families prior to ’48, and therefore need to be returned. As a result of the ruling, 58 Palestinians would be forcibly displaced from homes that their families have lived in for generations.

While Israel’s Supreme Court has postponed the Palestinian families’ appeal hearing, the violence has only escalated, notably since the end of Ramadan.

Radi Tamimi, a protester at Saturday’s event, wanted to use the protest to criticize the U.S.’ relationship with the Israeli government, in which the State Department describes Israel as having “no greater friend than the United States.” According to the Congressional Research Service, the U.S. provided $3.3 billion in “Foreign Military Financing” to Israel in 2019, and $500 million in missile defense funding.

In addition to raising awareness, Tamimi hopes that the momentum surrounding Palestinian advocacy can halt U.S. funding toward the Israeli government, considering what he described as “atrocious and quite frankly, disgusting ethnic cleansing.”

Human Rights Watch, a nonprofit that investigates and reports on human rights abuses around the world, described Israel’s policies as abusive and crimes of apartheid.

Progressive Democratic lawmakers, including Sen. Bernie Sanders and Rep. Cori Bush, have also raised questions surrounding the U.S.’ funding of Israel. Other Democratic politicians, such as Rep. Rashida Tlaib, Congress’ only member of Palestinian descent, have also called out the Biden administration for what they describe is a lack of appropriate response toward the violence.

Disgusting and immoral for the US to endorse this violent bloodshed.

I don’t know any other time when the US has actively blocked a ceasefire and allowed for civilians to get slaughtered. pic.twitter.com/Nax4QHRbjU

On Wednesday, President Biden expressed hope for both Israel and Hamas to end the violence, adding that Israel has a right to defend itself. Lawmakers such as Rep. Alexandria Ocasio-Cortez called out the latter message, saying that the statement was vague and implied the U.S. to “look the other way at human rights violations.”

Protest participant Zaid Assaf, whose parents fled the city they lived in near Jerusalem for Jordan during the 1967 Palestinian exodus, said he felt that news media coverage of the current events contributed to an erasure of an existing power imbalance between Israel and Palestinians. Assaf added that coverage has a tendency to highlight the violence that happens to Israelis, oftentimes missing the violence happening to Palestinians.

“You’re not fighting with the same force, you know? [Hamas] throws rockets — honestly, I want to say it’s wrong, but I really can’t at this time because they have to do something to protect themselves, or defend themselves at least. It’s always portrayed that the Palestinians are the ones that are making the problems — it’s not true, you know, they’re not making the problems.”

Assaf also noted being unable to permanently return to live in the region, while calling out what he described as a double standard enacted by the Israeli government through the Law of Return, which grants Israeli citizenship to any Jewish person seeking it, so long as the minister of interior does not deem the individual a threat to the state.

While Assaf expressed uncertainty as to whether or not real change will come about, both he and fellow protester Eslam Najjar said that social media has allowed Palestinians in Gaza to reclaim their narrative, which Najjar said has been misrepresented by mainstream news organizations.

Palestinian advocates have reported censorship on social media sites, but Najjar said that the overwhelming support for Palestinian justice has allowed their voices to be heard regardless.

“With the power of social media, we see the international community. And in our own country, there’s much more support than we ever thought — we always felt like an outlier,” Najjar said. “And now we realize that this is condemned all around the world. Now we need us in Israel to put an end to this — these atrocities.”