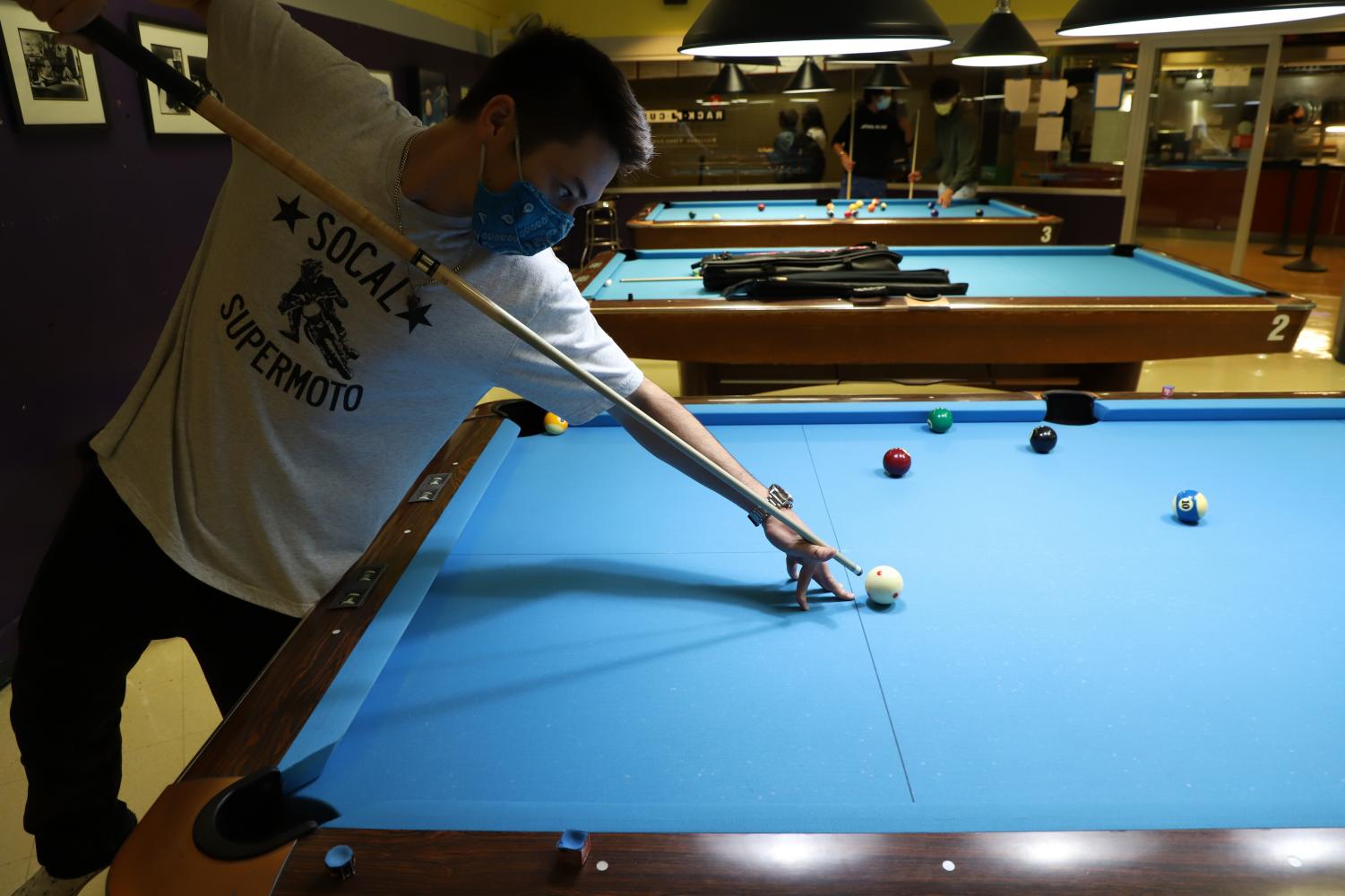 Justin Baskin, 20, takes aim at a pool ball during a game at Rack-N-Cue on Aug. 25, 2021. Baskin seemed excited for the opening, mentioning that he plays on a team that competes against other schools. (Photo by Amaya Edwards/Golden Gate Xpress)

Justin Baskin, 20, takes aim at a pool ball during a game at Rack-N-Cue on Aug. 25, 2021. Baskin seemed excited for the opening, mentioning that he plays on a team that competes against other schools. (Photo by Amaya Edwards/Golden Gate Xpress)

Alex Arriola, amid the clacking of pool balls and the chatter of players, described lifting the covers off of the pool tables at Rack-N-Cue for the first time since March 2020 as a near-religious experience.

“It’s like that corny stuff where something happens and you kind of hear the angel chorus going,” Arriola said. “That’s how it felt, I felt the light coming off the table like, ‘Oh my God.’”

SF State’s first day of classes marked the reopening of Rack-N-Cue — the Associated Students-run pool hall and game room tucked away in the student center’s basement across from Nizario’s Pizza. Arriola, a psychology major and an employee at the pool hall, made sure he was there for opening day.

“I’m kind of sad that it’s not as popular as it was before,” Arriola said. “But I’m also excited to try to get it back to where it was.”

Amanda Verzosa, a regular at the pool hall over the past two years, started working as a games room attendant this semester while completing her master’s in molecular biology. Moreso now than ever, Verzosa said that one of Rack-N-Cue’s main struggles since reopening has been getting students back in.

“Every time we get some new students that come down here, we always encourage them to invite their friends and other students if they just want a nice place to chill or hang out or have fun,” she said.

One change Rack-N-Cue has made this semester has been to make admission free, which was previously $1.75 according to the AS website. This is something they hope will bring more students down to the space. Verzosa said that Rack-N-Cue also collaborates with other AS programs, such as the Depot, on things like game nights, and are working on starting up their billiard workshop program again for students who are looking to get better at the game.

Everything in here is about food and community resources but this is just a place to relax — that’s very rare, I think, on college campuses now.”

Eng said he believes that the games room is unlike other amenities in the student center, something he thinks helps it stand out compared to some of AS’s other programs.

“I think that it’s one of the more visible programs because it’s visibly different from what else is in the building,” he said. “Everything in here is about food and community resources but this is just a place to relax — that’s very rare, I think, on college campuses now.”

“You have to support these kinds of spaces in order for the community to grow enough to do that,” Eng said. “It comes from people power, not just resources and throwing money at the problem.”

If “people power” is the solution, it’s going to take more than places like Rack-N-Cue to solve the problem, given the high percentage of SF State students who are commuters.

According to the common data set survey of the university’s student population for 2019 and 2020 (selected as on-campus housing was limited for the 2020-2021 school year), 93.1% of undergraduates commuted to classes. For this majority of commuters, according to Arriola, the current scarcity of on-campus recreation spaces means that many leave campus not knowing places like Rack-N-Cue exist.

Rack-N-Cue, like pool halls around the world, must also contend with fighting the perception that it exists as a type of boys-club on-campus.

Metztli Soto, a first-year psychology major who started working at Rack-N-Cue this semester, said that although her coworkers and the players make her feel welcomed, she wishes that the space was less male-dominated. She estimated that around 90% of the pool hall’s customers were men.

Despite this, she feels that the presence of her and her and Verzosa, are a step in the right direction to make female and non-binary patrons feel more comfortable.

Christine Lwin, an SF State alum currently working toward her master’s in occupational therapy at the University of St. Augustine, said that she comes back down to Rack-N-Cue as a way to destress and to catch up with old friends.

“I would have played if it was free or not, it’s [a good place] to relieve stress, have fun and hang out with these losers,” she said while jokingly gesturing to her friend Thanh Bach.

Lwin said that when she was a student on campus, she would spend up to four hours a day playing pool with her friends, sometimes going as far as to help the employees clean the tables at closing.

“The first thing they ask is your name, how you’re doing or what major you’re in, just to get to know each other,” Bach added.

Still, Lwin thinks that one of the reasons that there are less female players at Rack-N-Cue and other pool halls is its association with bars. Verzosa echoed this, but said that the space was trying to change the boys-club reputation pool has garnered.

Justin Baskin, a mechanical engineering major, said that he started coming to Rack-N-Cue during his first year on campus in 2019. A casual player growing up, Baskin said part of the reason he landed on SF State was not for its academics, but because he knew there would be pool tables on campus.

Life is almost waiting until you get to play ball”

Baskin said that part of pool’s appeal is its international popularity, particularly in Asia. He and many of his friends grew up around pool, making the game a shared point of cultural reference. John Gayaban, a Filipino games room attendant at the pool hall, said he’s noticed that many of the Asian attendees at Rack-N-Cue grew up either playing pool themselves or grew up watching their family play.

In the Philippines, Gayaban said that pool halls are everywhere. He said that professional players like Efren “The Magician” Reyes, a Filipino player whom many regard as the best to ever play, inspired himself and many others to take up the game.

“Seeing this, seeing all the things that he does like, ‘Oh, I can do that too, I just got to put in the practice,’” Gayabam said.

Another part of the allure – ironically enough – was the pool community’s shrinking numbers, which according to Baskin, made everyone more passionate about the game.

“Life is almost waiting until you get to play ball,” Baskin said. “This is a very sacred place, “[these are] important people to me, these people helped me a lot.”

Baskin started frequenting Rack-N-Cue more often after finding contentment along with a sense of belonging to a new community eventually getting to know the regulars, picking up tips as he went along, buying his own cue and later, joining the pool team.

SF State’s pool team, which had previously travelled and competed against schools such as UC Davis, Sacramento State University and San Jose State University among others, was nearly 10 years old before shelter in place orders caused it to disband three semesters ago, according to Gayaban, who used to compete.

“My main goal right now is to rebuild the team and get us back out there again,” he said.

Aside from the mask mandates and the sanitation of cues and tables between games, this semester greeted returning players with some changes. The tables themselves, now finished with a fresh layer of crystal blue felt and equipped with new leather pockets, were another change made right as quarantine set into place.

According to Eng, this meant that the players on opening day were some of the first to christen the new tables, a full year and a half later.

Later, a group of employees and onlookers gathered around one of the tables, watching on as Gayaban and another employee, Ryan Acbay, hunched over an intense, fast-paced game.

“We’re not pros, but we play a lot of pool,” Acbay, who before the pandemic, taught pool lessons at Rack-N-Cue, said, nearly yelling to be heard over the excited chatter around him.

Back at Arriola’s table, the third-year said he was still learning how to play pool after his impromptu 18-month break. Shortly after, the four balls he sunk with precision told another story.

“Sometimes I turn it on,” he said between turns before leaning over the table to focus on his next shot. The stress of being back on campus and starting in-person classes could wait. For now, it was just time to play pool.