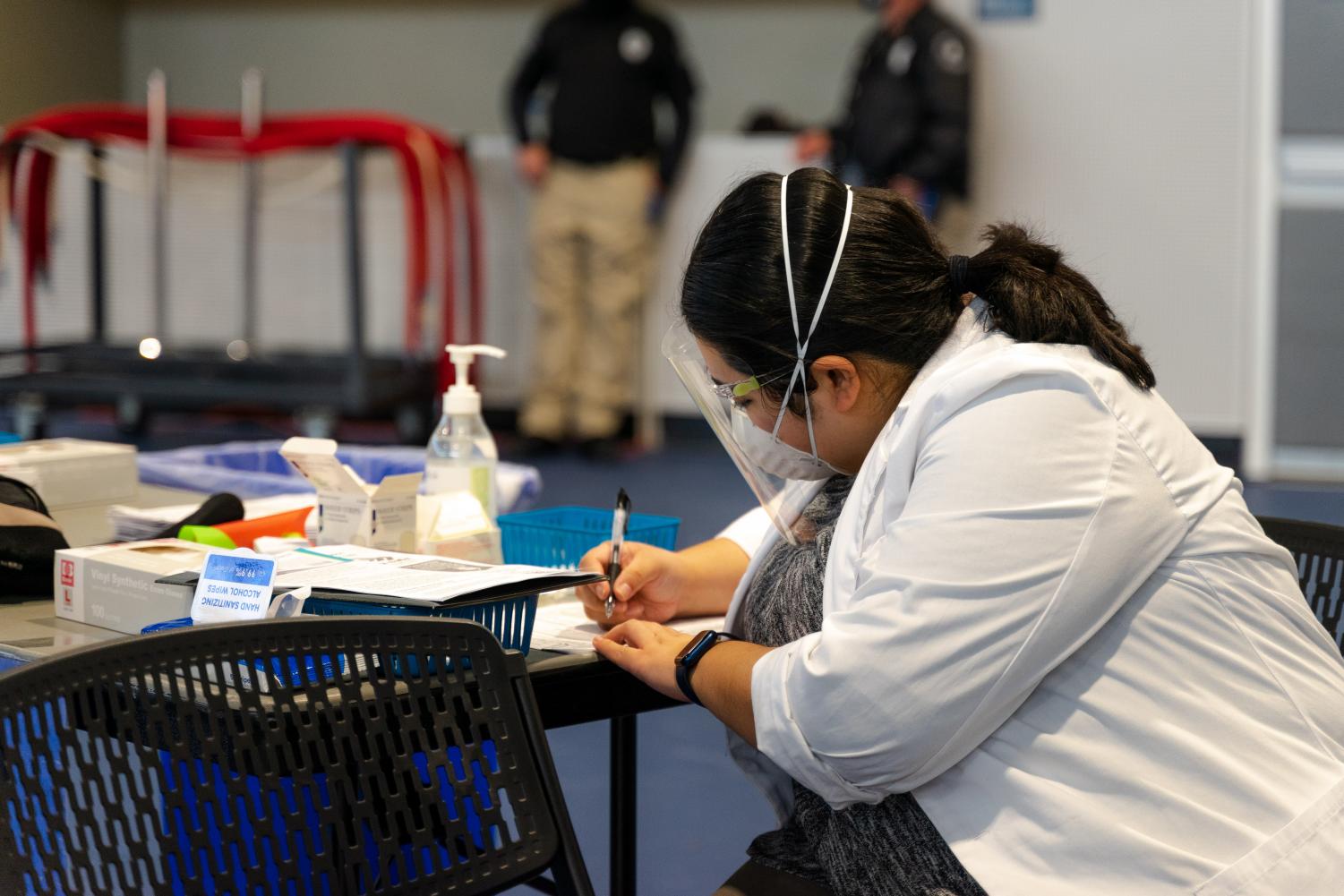 A nurse fills out documentation before administering the vaccine to patients on Wednesday at the Mashouf Wellness Center. (Jun Ueda/Golden Gate Xpress) (Jun Ueda)

A nurse fills out documentation before administering the vaccine to patients on Wednesday at the Mashouf Wellness Center. (Jun Ueda/Golden Gate Xpress)

An advisory committee for the Food and Drug Administration unanimously recommended on Friday that Americans aged 65+ and immunocompromised individuals should become eligible for a third dose of Pfizer-BioNTech’s COVID-19 vaccine. The decision comes after the same committee recommended, in a 16-2 vote, that Americans aged 16 or older or that are not high risk are currently ineligible for a Pfizer booster shot.

The committee that recommended the approval of a booster shot is the FDA’s Vaccines and Related Biological Products Advisory Committee, or the VRBPAC. The VRBPAC advises FDA decision-makers, but does not vote directly on the approval. The FDA is expected to make an ultimate decision on the approval of a Pfizer booster shot for elderly and high-risk individuals in the next few days, according to VRBPAC officials who spoke during the meeting.

Some advisors voted against the recommendation for the general public to receive a booster shot due to the lack of research or evidence that a booster would slow the pandemic at large.

“I don’t think a booster dose is going to significantly contribute to controlling the pandemic,” said Dr. Cody Meissner, a professor of pediatrics at Tufts University School of Medicine in Massachusetts, during Friday’s meeting.

“It is very important that the main message that we still transmit is that we have got to get everyone two doses. Everyone has got to get the primary series. This booster dose is not likely to make a big difference in the behavior of this pandemic,” Meissner said.

This recommendation comes weeks after the Biden administration outlined a plan to have most Americans become eligible for a booster shot starting on Sept. 20. While the panel’s decision puts a dent in the degree in which the White House planned to have boosters rolled out, it is still a step toward getting a third vaccine shot in the hands of the American public.

A third dose of the Pfizer COVID vaccine hasn’t been widely approved or recommended to the public until now. On Aug. 13, the Centers for Disease Control recommended that “people who are moderately to severely immunocompromised receive an additional dose of the COVID-19 vaccine.” Some states have begun to follow suit, and according to the CDC’s COVID Data Tracker, 2.04 million Americans have received an additional third dose since Aug. 13.

According to the State of California’s website, over 23 million Californians are fully vaccinated, representing 68.8% of the state’s population. The website also mentions that San Francisco County, as of now, has around 1.3 million residents who have received at least one dose of a COVID-19 vaccine. According to the CDC, 54.4% of the U.S. is fully vaccinated as of Sept. 17.