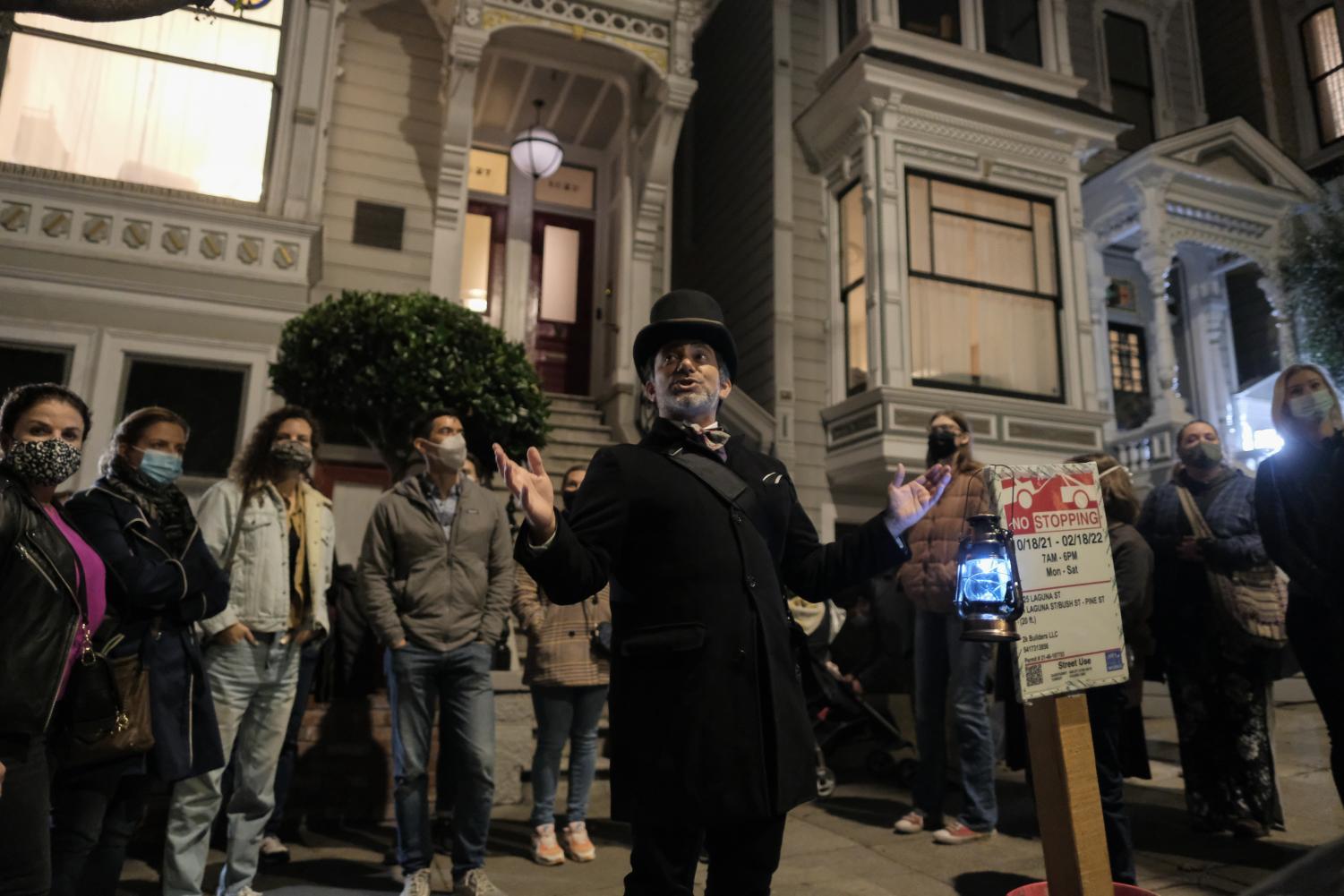 Dressed to mimic the Haunted Mansion archetypes from Disneyland, Christian Cagigal offers attendees of the SF Ghost Tour stories of various spirits that still have a presence, on Oct. 26, 2021. Attendees came from all across the Bay Area and out of state. (Cameron Lee / Golden Gate Xpress) (Cameron Lee)

Dressed to mimic the Haunted Mansion archetypes from Disneyland, Christian Cagigal offers attendees of the SF Ghost Tour stories of various spirits that still have a presence, on Oct. 26, 2021. Attendees came from all across the Bay Area and out of state. (Cameron Lee / Golden Gate Xpress)

After a pandemic-induced hiatus, the city’s oldest ghost tour is back to it’s unique mix of ghouls and history

The streets of Pacific Heights on a Tuesday night are not a typical setting for a history lesson. The teacher, cosplaying as a cross between a Victorian gentleman and a cast member from the Haunted Mansion at Disneyland, does little to make this any less strange.

Still, when Christian Cagigal, SF Ghost Hunt’s owner and only tour guide, told the story of Mary Ellen Pleasant — an abolitionist referred to as the “mother of civil rights in California” — the tour’s 32 participants seemed to hang onto his every word.

Cagigal might look like a steam-punker out of context of the tour. His nightly-uniform consists of a black peacoat, a pink bowtie and a black top hat with an outward curving brim. He said that his Victorian-style outfit is common amongst ghost tour guides. He was armed with an old-timey lantern to complete the look.

“I think we’re all just kind of trying to mimic the Haunted Mansion archetypes,” Cagigal said in an interview before the tour.

Cagigal started SF Ghost Hunt with his then-business partner Jim Fassbinder in 1998, making them the first ghost tour in the city. At the time Cagigal was studying theater at SF State. The pair already knew of each other from San Francisco’s amateur magician scene; he said Fassbinder initially reached out due to his penchant for mixing storytelling and magic.

When Fassbinder retired in 2016, Cagigal took over. Since then, he said he’s made a few updates, mainly leaning more into themes of social justice and feminism. The latter, he said, was accidental at first.

“It’s a very pro-women program,” Cagigal said. “I wasn’t trying to do the feminist ghost tour. It’s just sort of what happened.”

Pleasant, the subject of the tour’s first stop outside what is now the Healing Arts Building on Bush Street, is an enigmatic figure in San Francisco’s history. An African American capitalist and millionaire in turn-of-the-century San Francisco, she put out three separate biographies in her lifetime — each one contradicting the last.

For her part, Cagigal said that Pleasant did little to clear up the rumors about herself. When it became the talk of the town that she was a Voodoo practitioner, she took to carrying a crystal ball in the palm of her hand.

According to some, she was a freed slave with ties to famous abolitionist John Brown. To others, she was a Voodoo priestess who learned her trade from Marie Laveau, “The Voodoo Queen of New Orleans.”

Cagigal said that he’s clear with the people on tour that his version of the story is just one of many. In fact, at the end of the tour, he said he sends an email out with links to two other books written about Pleasant that dive into two other potential life stories.

“It was important to me to try and do what I could to represent her better,” Cagigal said.

Since her death, he said that Pleasant’s spirit continues to haunt the property where her mansion once stood. Dogs have been known to bark unprovoked when they walk by. Another time, a crow swooped from above and landed on the head of a local restaurant-owner, and the tall eucalyptus trees that Pleasant planted herself have been known to fling their seeds at passersby with unusual precision.

Almost all of the spirits featured on the tour are women — and strong ones at that, according to Cagigal.

“If there’s some sort of demonization that happens with them in the story, I try to temper it with context so that people can understand why this person or that person may have done whatever they did,” he said.

Since Fassbinder left, he ran the tour several nights a week until the pandemic hit, forcing him to cease operations with the exception of some virtual tours last October. Cagigal said that he started in-person tours again last June, starting at 20 people three nights a week. This was less than his average 30 or 40 people per tour before the pandemic.

People are just dying for something. They want to get out.”

To his surprise, those tours sold out, so he upped the number to 25 people and added an extra night, only to run out of tickets again. Cagigal said that so far, it’s been one of the best Octobers the company has ever had, something he factors in part to the pent up boredom people had over the pandemic.

“People are just dying for something. They want to get out,” he said, adding that the fact that the tour was outdoors and required masking for non-vaccinated participants helped customers feel safe.

Tina Robinette and Andrew Chapman, both from Alameda, said that they had signed up for Ghost Hunt because they were fans of ghost tours. Robinette estimated that she had been on around 10 across the country, while Chapman said that he had been on between 20 or 30 tours.

Since the two had just recently moved to the Bay this year, Robinette added that they’ve found that ghost tours are a unique way of getting to know an area, mentioning that they’ve been on other tours in New Orleans, Canada, Washington D.C. and across California.

“It’s a really fun way to tour a city,” she said. “This is the first tour we’ve been on in San Francisco since moving here.”

Chapman said that Cagigal had a fun vibe compared to some of the other tour hosts he’s dealt with in the past. He said that his animated personality helped with this.

For somebody in the business of the paranormal, Cagigal still holds a fair bit of skepticism, something he is open and honest about on his tours. When telling one of his stories, he describes a sudden and mysterious death before interjecting, quite sarcastically, that the death could have been from a whole range of things.

“It was the 1800s, all deaths were sudden and mysterious,” he said.

Still, amidst his own skepticism, Cagigal said that he wants to believe in ghosts. According to him, his favorite moments on tour come not when he’s teaching, but when he’s at a loss for an explanation.

“I love those moments,” he said. “When I’m in a little spot of mystery going, ‘Maybe there was a ghost, who knows.’”