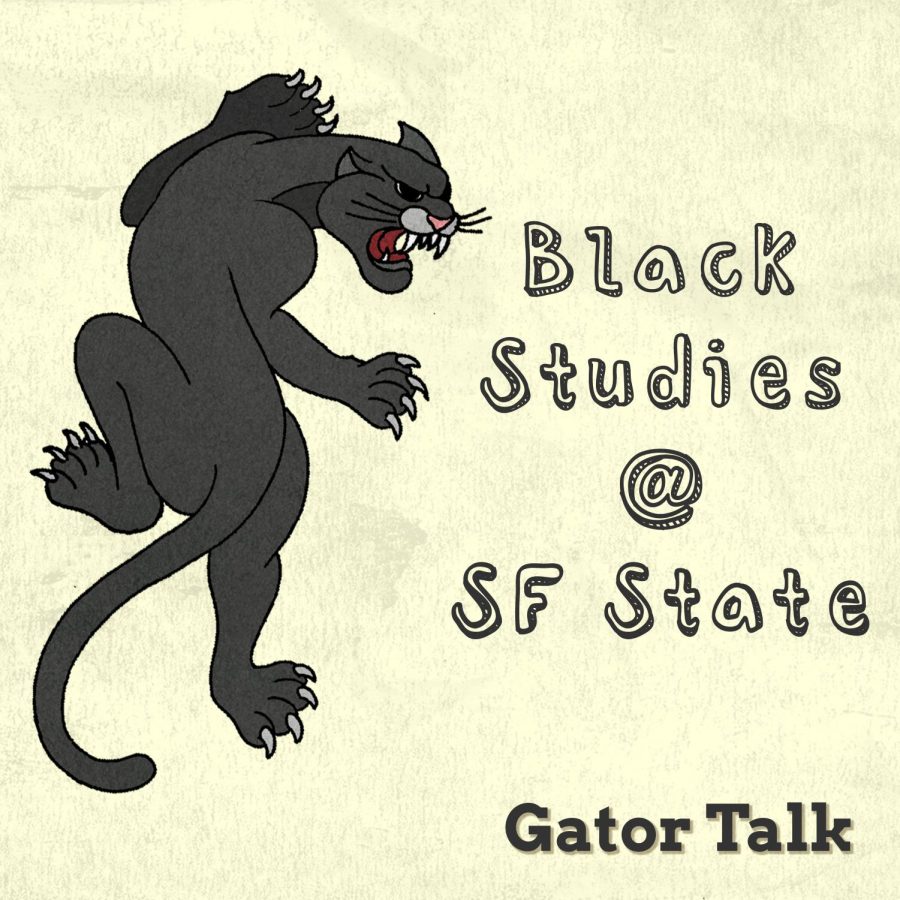 In celebration of Black History, Multimedia editor and guest Nicolas Cholula sits down with Dr. Oba T’Shaka to discuss the birth of the Black Studies department at SF State in 1968.

Chris: Happy Friday, Gators! This is Chris Ramirez, your host and editor-in-chief for Gatortalk, the podcast where sometimes we podcast. With me today is Nicolas Cholula, your multimedia editor and today’s guest.

Chris: Let’s get into it. For more information/coverage, check out goldengatexpress.org AND @GGXnews on all social media platforms.

Chris: Welcome back to campus, Gators. In celebration of Black History Month, we wanted to take a look at the history of the Black Studies Department at SF state, now known as Africana Studies. So, Nicolas Cholula sat down with Dr. Oba T’Shaka, a former professor and chair of the Africana Studies at SF State, to learn more about the department’s history and how students helped create a more inclusive campus.

Chris: So, can you tell me a little bit about the history of Black Studies?

Nick: Black San Franciscans have secured a large part of the hotel and restaurant industry, and with the fear of being pushed out, white hotel workers threaten to strike unless all Black people are fired.

Nick: Their strike turned out to be successful, and hotel owners fired all their Black employees.

Nick: It wasn’t until 1963, during the San Francisco civil rights movement, that they were able to secure the jobs lost in 1870.

Nick: That same year, the Congress on Racial Equality — CORE — led by Dr. Oba T’Shaka held a Christmas boycott against JC Penny’s and Macy’s, which successfully opened up jobs for Black people and people of color in – all of the major department stores.

Nick: CORE, along with other organizations, went on to campaign against other corporations in the years that followed, making it the largest and most effective civil rights movement in the north.

Chris: So Nick, how does this all tie into the history of SF State and its Black Studies Department?

Nick: That’s a great question Chris and to help explain this, I spoke to Dr. T’Shaka myself

Dr. T’Shaka: and while they were in jail, along with us at the Sheraton Palace, demonstrations for jobs in 1964, they conceived of the experimental college.

Chris: Hm … and what exactly is the Experimental College?

Nick: That baby was the Black Studies Department

Chris: Support the Golden Gate Xpress’ work by signing up for our online newsletter, following us on Instagram AND Twitter @ GGXnews and visiting the website: https://goldengatexpress.org

Chris: And, we’re back

Chris: Wait, Nick, Dr. T’Shaka mentioned something earlier about a strike. Can you tell me a little bit about what he meant by that?

Dr. T’Shaka: “the Black community’s consciousness had been raised by the Black Freedom, Black Power movement. And as a result, there was a thirst for knowledge self and a curriculum that reflected the history and culture of the people.”

Nick: At the same time, racism on our campus created an awareness and need for Black Studies courses to counter white values and outlooks.

Nick: Dr. T’Shaka also says that many Black students felt alienated because they would go in the classroom and were treated unfairly. He said that the term then “was culturally deficient.”

Dr. T’Shaka: Some said they almost felt like committing suicide because based on camp, based on what they were getting on campus,

Dr. T’Shaka: They weren’t getting an education. They were getting a miseducation. They were being insulted and not encouraged. So the demand for a Black Studies department and a curriculum and then ethnic studies that followed that came out of those demands in the community, growing sense of Black pride and a need to know our history and culture, which had been denied to the teaching of which had been denied us in the public schools.

Nick: The Black Students Union, or BSU, led the fight for the creation of the Black Studies Department, but their demands were made to feel unimportant by the administration, and it was becoming apparent that only a couple of teaching positions would be made available. So, they felt forced to call for a strike.

Nick:  In the strike, the BSU was joined by the Third World Liberation Front, which added its demands for an Ethnic Studies Department. The strike lasted five months and is still the longest academic strike in U.S. history.

Chris: And what came out of the strikes?

Nick: After the strike, students gained a Black Studies Department with jurisdiction over the courses. They gained a College of Ethnic Studies and 12 full-time professor positions, with the right to hire and fire faculty, among other demands. SF State also started admitting more Black students.

Nick: It was, considering that at the time, there were only a little over 150 students of color on campus.

Dr. T’Shaka: they felt a sense of empowerment I know I taught them for 40 years. They got, as one of my students said, in order to think you need something to think with. And what they got was relevant. History, culture, politics, literature, various fields and Black Studies. What they got was the knowledge of their history and culture. And it gave them something to think with.

Dr. T’Shaka: They were able to think creatively and boldly and they had a sense of their own identity and a sense of self love and self respect.

Nick: In 2005, the Black Studies department changed its name to Africana Studies under the leadership of Dr. T’Shaka.

Nick: He said that too many people focus on the name, but it wasn’t only the name that changed — it was also what was being taught. The department had to change to address fundamental changes that had occurred in the Black community, where violence and drugs were breaking up families.

Nick: So, the reason why Africana Studies was the name they chose was simple: it connected the color of the skin to its origin, both historically and culturally.

Nick: I asked Dr. T’Shaka what he thought were some issues Black communities will have to face to move forward. He said that he’s heard many youth say that they’re not afraid to die, but instead, afraid to live a life of marginalization.

Dr. T’Shaka: There’s a fear of living. Why? Because life is so short, life is so impermanent, and because the condition of life when you do live a marginal I mean, if you don’t have some real good skills, either college skills or highly technical mechanical skills, what to you ain’t got no future in this economy because you’re going to be making nothing but low wages and you can’t support a family on that.

Nick: Dr. T’Shaka emphasized that we need to appreciate our own culture. For Black people, that means drawing from the same rich culture that empowered previous generations with a sense that they could stand up and fight, much like the generation of today leading the Black Lives Matter Movement.

Chris: Here’s what else has been happening this week

Chris: And that was the episode.

We hope you enjoyed this episode, and thanks for listening. This is Chris Ramirez, editor-in-chief and your host for Gatortalk. New episodes will premiere every other Friday, so stay tuned! And with that, I’m out.