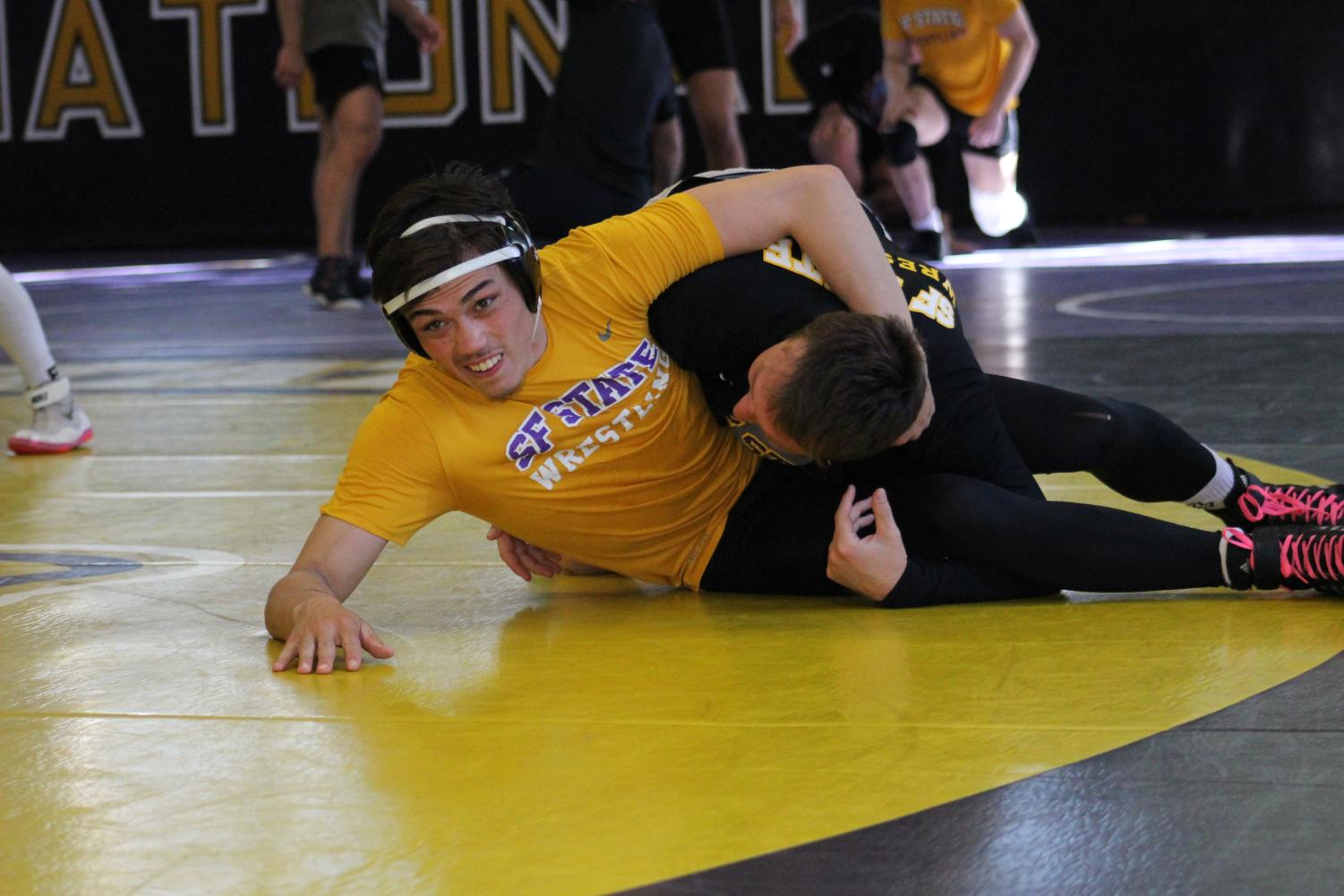 Mason Boutain has been around wrestling his whole life. As a child, he played on the wrestling mats while his dad coached the local wrestling team. After growing fond of the sport, he dove into wrestling at eight years old. Now, he’s just competed on the biggest stage of his wrestling career.

Boutain in his final year at SF State earned a trip to the NCAA Wrestling Championships in St. Louis from March 11-12.

Boutain didn’t advance far in the tournament, falling 13-10 in his first match and 3-2 in the final match of his college career. Despite this outcome, he is proud to have advanced to the highest stage in Division II wrestling and is optimistic about his future.

“It’s a harsh sport, but it teaches you many things that I feel like apply outside of wrestling,” Boutain said. “To overcome adversity and to have fun in the midst of that and to let go control of your outcomes. It teaches you to enjoy the process and the journey of life in general.”

Boutain and his teammates missed the 2019-2020 season due to COVID-19 restrictions, but in the 2018-2019 season, Boutain made it to regionals and was ranked fifth in the nation for his 149 pound weight class. He was also named to the All-Rocky Mountain Athletic Conference team.

Jason Welch, the head coach of the wrestling team, started his coaching career in 2017 at SF State when Boutain was a freshman. He expressed that it has been amazing to watch both of them grow along the way.

“He’s kind of been my protege,” Welch said. “I’m happy to have had an influence on him, not just as a student athlete, but I think as a future coach and community member.”

SF State wrestler Aaron Galef joined Boutain at the tournament to help him with his strategy and to study his opponents. He said that Boutain has played a “big brother” role in welcoming him to the team.

“When I was on my recruiting trip, we went surfing in Bolinas,” Galef said. “Getting to know him, his story and him coming back an extra year when he wasn’t sure. That was awesome, the time that we spent together.”

Boutain is in his final year at SF State and is studying to be a nurse, with a minor in Athletic Coaching. He plans to apply for nursing programs for when he graduates, but is also looking forward to becoming a wrestling coach. He said that he will always be around wrestling and wants to give back to that community.

“At first, I didn’t really like it, to be honest, it was hard.” Boutain said. “As I got older, I started to appreciate it. I really love wrestling and I want to give back and I feel like this is the way I can do that.”

Mason Boutain: Wrestling is a lifestyle.

It’s my last couple of practices and it’s starting to hit me now. And it’s like, oh, I’m going to have like reminiscing on, like, all the times that I had in this room I’ve been here for so many years and just realizing how thankful I am. And this being my last tournament, I want to go out with a bang and just not really about worried about the outcomes.I just want to have fun and enjoy these last few weeks.

Joshua Fuentes Norikiyo: I’m happy for him. He gets a chance to win a national title, which is everything we’ve been working hard for this whole year. So it’s great.

Aaron Galef: Being a team captain, he’s done a great job at just facilitating hard work and persistency and sometimes the easy way out is in the best way. Just keeping your head down every day and pushing to your limit as much as you can is the way to go. So he’s been really good this year. Transferring from like a Division One program, I was hoping for, like a big brother like him to come in and kind of show me the way. And he’s done a great job.

Mason Boutain: I’m really worried about like just performing my best, like competing my best and wrestling as hard as I possibly can in. Making those last few matches that I have like definitely worth it and having people like dang Mason wrestled, hard.