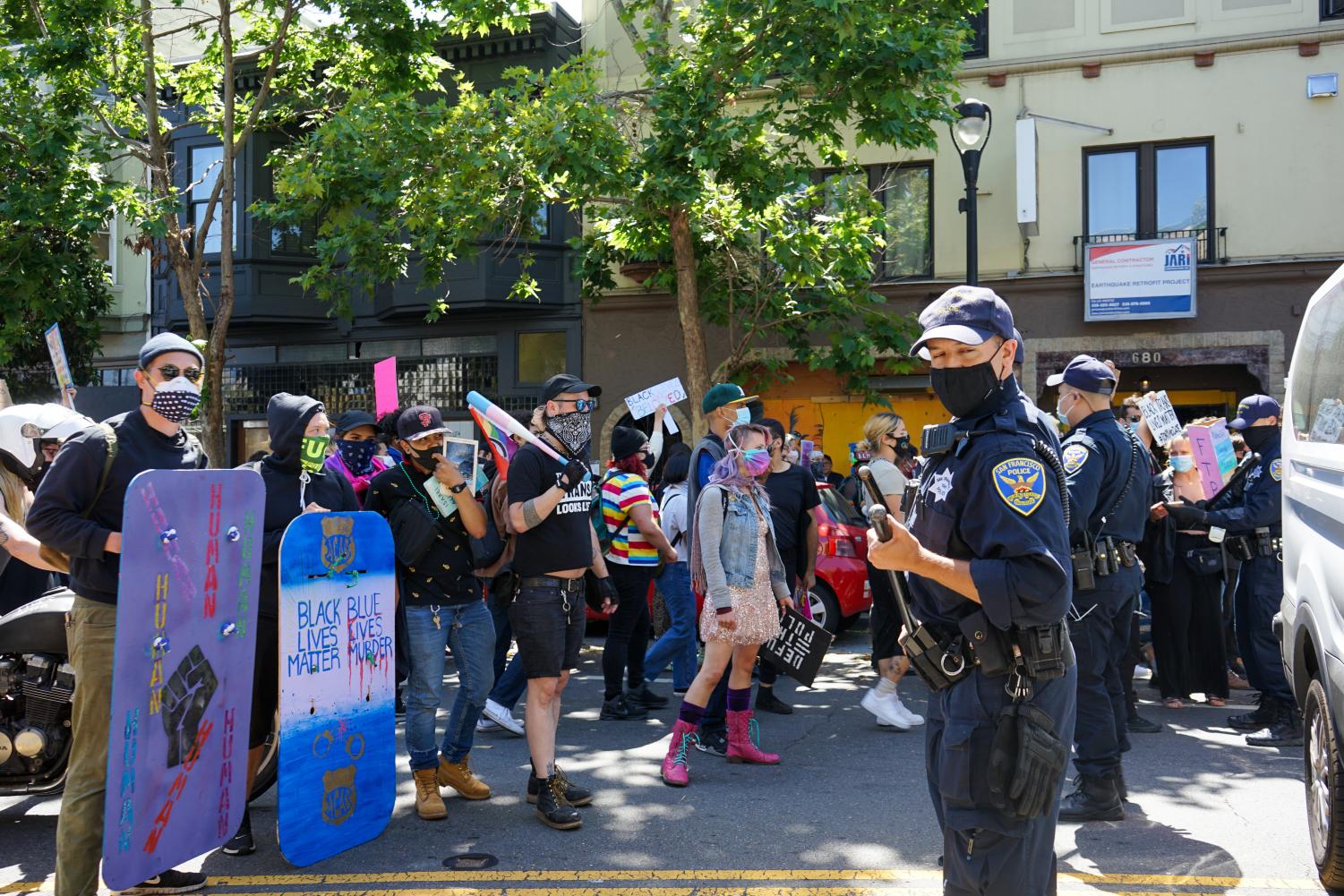 Yesterday marked the 50th anniversary of Pride, the annual celebration of acceptance and equality for the LGBTQ+ community. Despite the city’s parade cancellation, the celebration was far from virtual.

LGBTQ+ community members and allies took part in a grassroot protest called “Pride is a Riot,” held at noon on 19th and Dolores. Scarcely promoted online, the organizers wanted to keep the movement authentic– free from police and what they call, “corporate pride.”

“We will gather to honor LGBTQ freedom fighters who came before us, to call for the liberation of Black, Brown and Indigenous people, and to demonstrate that trans and queer people are in this fight,” read the event’s post on Indybay.

Participants met in front of the Mexican Liberty Bell in Dolores Park. People placed marigolds, candles and sage sticks in front of a memorial that commemorated the names and faces of 60 individuals who were victims of hate crimes, police brutality and AIDS. Among those being honored were Marsha P. Johnson, Lexi Ebony Sutton and Larry Kramer.

One protester knelt at the memorial wearing a rainbow flag as a cape, with a cardboard sign behind her reading, “Why is it so hard to love? You’re afraid of seeing something beautiful.”

Though this was, in part, a celebration of the LGBTQ+ community, it was also an effort to link Pride back to its history, which began with Black, transgender women leading the fight at Compton’s Cafeteria riot, and draw parallels with today’s Black Lives Matter movement.

According to the SF LGBT Center, Compton’s Cafeteria in the Tenderloin was one of the few spots drag queens and transgender folks could find community in the ‘60s, though it was frequently raided with violent arrests for “female impersonation” by the police. One drag queen’s retaliation– a cup of coffee thrown at an officer’s face– started momentum for revolt.

Donna Personna, 72-year-old activist and last year’s grand marshal of Pride, knew these women as friends and comrades. Though she was not present when the riot took place, she wanted to share their stories to the crowd, who settled on the grass and concrete of Dolores Park.

“They came from all parts of the country, and they had decided to live an authentic life. They wanted to live as women,” Personna said. “As soon as they made that attempt, their lives were completely criminalized.”

There were no organizations to support young, queer folks 50 years ago, Personna said. She added that the law, “the church” and the medical industry were against her and her friends. Tears welled in Personna’s eyes when reminiscing about those who didn’t live to see today’s progress, but shook off the tears, as that “wasn’t pretty.”

“[These women] never found out that what they wanted was OK. It does my heart good to understand … to know that they are serving a purpose now,” Personna said. “They’re trying to make your life better.

Other voices came to the stand to express the importance of Black, queer voices after George Floyd’s death sparked nation-wide protests against police brutality, which are still ongoing. Christian Washington, event participant, urged participants to “keep the spirit of intersectionality.”

“Understand that while yes, we all are different and we all have things that we can share and bring to the table for this movement, there are so many marginalized communities,” Washington said to the crowd. “If we’re not protecting them, no one’s protecting them.”

Youth advocate Iván Massel believes people should be “cultivating, nurturing and fostering” young people to stand up for what they believe in, as they have the potential to shift the conversation.

Student activism fueled Black Lives Matter, according to Forbes. This summer, there’s been youth-led protests across the country (and the Bay),  a surge in voter registration and over 22 million posts under #BlackLivesMatter on Instagram.

As speeches continued toward 2:00 p.m, Dolores crowded with hundreds of participants listening and cheering, holding cardboard signs and wearing masks. Massel was happy to see people turn out “without like, the Absolut Vodka endorsement”.

After the series of speeches, a piñata made to look like a police car greeted the protesters at the bottom of the park, suspended in the air by a traffic light. With each blow came a roaring cheer from onlookers. After about five hits, the piñata burst open with beads, candy and noise makers.

The march then proceeded. Roughly a dozen motorcycles led the pack down 18th toward the intersection of Market and Valencia. The streets filled with booming bass and rally cries.

“I’m not going to wish you a happy Pride, because there’s nothing happy about it this year,” Personna said to the crowd. “This year, Pride is a riot.” 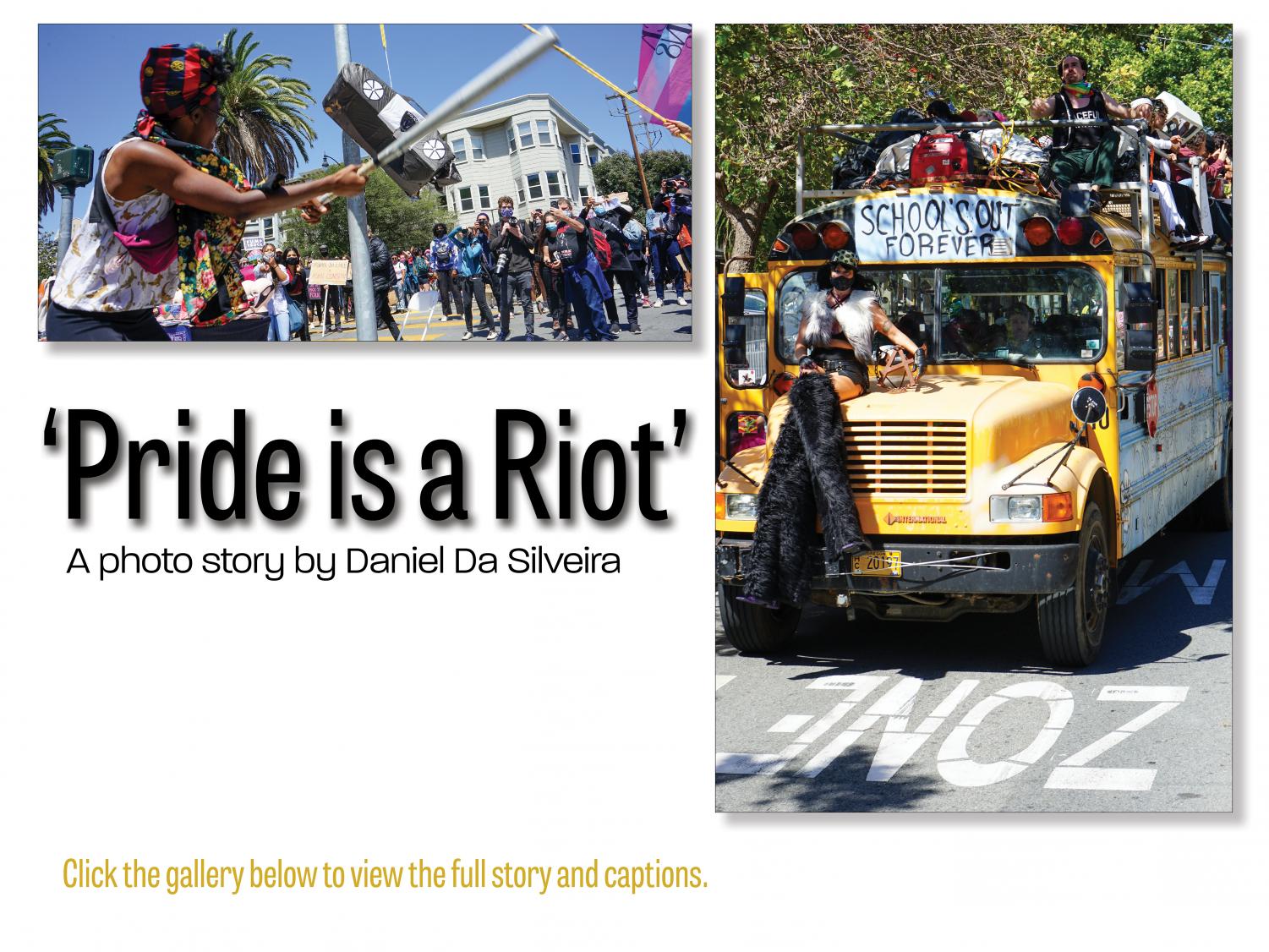 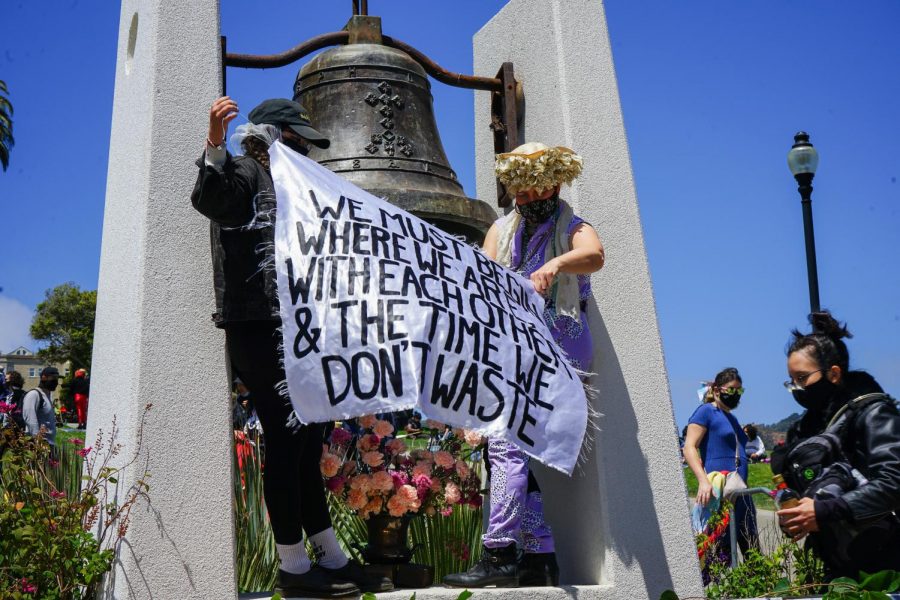 Gallery|19 Photos
Protestors set up a sign in Dolores Park during the Pride is a Riot in San Francisco, Calif. on June 17, 2020 (Daniel Da Silveira / Golden Gate Xpress)
Leave a Comment